Wow is all I can say.

He's 6-7, 244lbs, has a huge wingspan, and is still growing! He is also quite mobile and can handle the puck decently. Jamie Oleksiak has all the tools to become a huge pain the ass for any NHL forward.

But what is keeping him from being a top ten pick is his hockey sense. While not terrible, it does make some question whether has the offensive upside to live up some of the Chara/Myers hype of whether he will become more of a Hall Gill type of player (who is still a solid defenseman).

But to me, imagining a guy that size patrolling the blueline is just too inticing and I'm sure many NHL teams will have a similar idea when it comes draft time.

"I think he has unbelievable upside," NHL Central Scouting's Gary Eggleston said. "Whoever gets him is probably going to hit a home run with this kid. You could be looking at a 15- to 16-year player in the League, and to get a kid that size and skates that well is not common. He handles the puck well, has an excellent shot and his pass percentage completion in two games I saw was 100 percent -- he never missed. He covers a lot of ice in a very short time and it's a long trip around the outside with that wing span of his. He always has that stick out there dangling, too, so he keeps the guys about eight feet away."

Defensive shutdown guy who excels with his positioning and long reach ... condor-like wingspan ... very good skater for such a big kid ... big, booming shot ... plays with an aggressiveness and edge ... hockey sense is the biggest question mark ... struggles with decision-making ... shot could use tweaking with the mechanics ...

Likely being the biggest player on the ice in almost every game ... a pretty good skater for his size and moves well laterally as well ... seems as if he has already grown into his 6’7" frame ... not known for his overly physical play ... spect of his skating that does need improvement is his lateral movement and quicker footwork ... doesn’t really have the offensive tools to be an offensive guy at the next level, making his role more of a shut-down type guy

OLEKSIAK LIFTS NORTHEASTERN PAST UMASS LOWELL IN OVERTIME, 3-2 (via hockeyeastonline)

He's too big to fit.

Just kidding. But with all the holes the team has, it isn't a defensive defenseman. But honestly, just the fact he can cover almost half the ice by himself, might make me rethink that.

Like I said, his size and mobility is making me think twice...

But no. At #10, I still have my favorites, which I will reveal to you all soon! 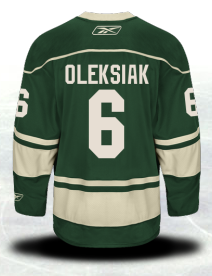