I know I am going to get !@#$ for this but I have Armia not included as one of my favorites to be picked as a Wild prospect in this years NHL Entry Draft.

Yes, he is a right winger. He is a goal scorer. He has tons of offensive ability and can really put the puck in the net. He also has a very big frame (6'3") and is very creative. He's also Finnish and the Wild do sure like their Finns.

But I can't ignore his inconsistency to play two-way hockey.

The Wild's prospect pool has been bare for awhile but the 2010 draft class has made me more optimistic. This year, we have another chance to build on the rare success, and I want a player that has the drive to make a difference.

Armia may be very offensively skilled, but his raw frame as well as his inconsistent play away from the offensive skills has put me off.

"He's big and tall but surprisingly mobile for a player of his size. He has a very good feel for the game and moving the puck well with his linemates. He has a heavy wrist shot that he gets off quickly and is always looking for the empty spots on the ice. He's a sniper with a good selection of shots. You might have to look for him during some shifts, but then, suddenly, he scores the winner."

One of the best pure goal scorers in the draft ... intriguing mix of size and scoring upside ... got a long stride and the ability to generate speed and separation ... whenever the puck is near him in the offensive zone, he's a threat to put it in the back of the net ... vicious killer between the hashmarks ... has a quick stick with laser-like release ... can be lackadaisical and is inconsistent in his backchecking efforts ... just looks lazy skating up and down the wing at times

Armia is a big winger with a lot of offensive skill ... his bread and butter is as a shooter ... at his best when he’s involved in the game and has the puck on his stick in the offensive zone ... got a solid release and does a good job of getting shots off in traffic ... is an adept playmaker and distributes the puck fairly well ... can create offensive opportunities with his puck handling and ability to protect the puck with his size ... still needs to work on filling out his frame ... goes through too many stretches where he’s not engaged in the game and has limited effectiveness ... competitiveness also needs to translate more to the other two-zones as well

He's a right wing, he's a goal scorer and he's a Finnish player.

Would not be surprised to see him get picked, but no from me at #10.

There will be many other promising prospects available at #10 and I am very uncomfortable about a prospect that shows a sort of laziness in his own zone. 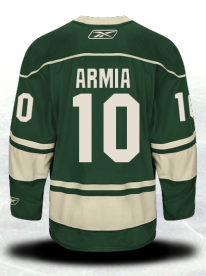