Possibly my favorite prospect in this entire draft, I am writing this article knowing he won't be there at our #10 selection.

Hamilton is a big defenseman with good two-way ability. He has very smooth skating and has the ability to come into the offensive zone and unleash a rocket of a shot. He can play physical and can move the puck effectively. What makes him my favorite prospect is his intangibles. I'm a sucker for prospects that display smarts off the ice and Hamilton won the OHL Scholastic Player of the Year (a 94% average). What makes successful NHLers is their dedication and hardwork and seeing an 18-year old kid work hard off the ice as well as playing 67 games (with many on the road) makes me smile.

But he most likely won't be available at #10. If anything, I see him moving up the draft.

"Especially at this level, you find guys that are awkward or don't have a lot of explosion. You're 6-foot-4, you don't have a lot of explosion (but) the jump off his skates is phenomenal. When he sees those opportunities to jump into the rush or lead the rush, I really believe it's untapped what he can do. He's a very special defenseman in our league. He just has to understand the details and he's going to be a very good pro . . . Dougie gets himself very prepared for hockey games. He's very diligent preparing himself. He goes about it very business-like. He's mature beyond his years."

A right-shooting defenseman who generates very good power and torque on his shot ... a self-described "sneaky offensive player" ... big, tall frame with long limbs ... very good skater ... exhibiting some real jump and smooth acceleration, top speed, and excellent lateral agility and footwork ... makes a pretty strong, crisp first pass ... aggressive in the offensive zone ... good physical presence ... bright, intelligent kid ... defense is a work in progress ... prone to trying to do too much in his own end ...

Hamilton is a big mobile defenseman who has showed big improvements in his offensive and physical games this year. He finished fourth in scoring for defensemen with 58 points (12 goals, 46 assists) after having just 16 points last season. He is a very strong skater and has the ability to rush the puck. He is a guy who likes to step up and hit, plus he has the size to do it.

He's not a forward but he's a bluechip prospect and thats what the Minnesota Wild needs.

I think he is an excellent choice at #10. But again, he won't be there. I'm 100% certain about that. And because of that, I'm writing this article and excluding him from my list of top potential Wild picks. 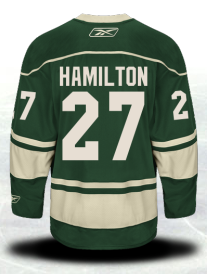