Alright. I really, really like Mark McNeil. But at some point, I had to cut my list down to four prospects or else it'll make me just appear lazy.

McNeill has all the tools to become an effective NHLer. He has very little flaws. He has speed, a big body, plays physical, has solid offensive skills, can play in all situations (and does consistently back in juniors), has solid character and can even fight.

In terms of flaws, he has some refining to do in his defensive zone play, but with his current sitruation playing all roles with Prince Albert, he'll have plenty of chances to fix up all his knocks.

But still, I had to cut my list and McNeill doesn't make it.

One thing I like about him is that he's a right-handed center, which is good to have. He's really composed and has a real pro-style game. He has a nice touch, can dish, and has nice, soft passes. His on-ice awareness is very good and he's paid attention to detail at both ends of the rink. He has good defensive-zone coverage as well as being offensive at the other end. All around I think he's got a real solid game I think his offensive game will improve the older he gets and the more confident he gets. I think he'll be a better offensive player than he's showing right now. He's good at both ends of the rink. He comes down low and helps out defensively.

Physical center who muscles through attempted checks ... good skater with fine acceleration ... mature, stong, NHL-ready physique ... hard shot with quick release ... finishes his checks and hits to hurt when on his game ... capable passer ... superb character and leadership ... nasty fighter ... his real value is in hockey sense and soft hands ... plays with a lot of energy and hustle ... too passive at times ... defense is a work in progress ...

A big, physical, right-handed center ... skating ability combined with solid strength and size ... known for his versatility ... used to kill penalties, score goals, to take late-game face-offs, and to play against the best players ... overpowers opponents in the corners ... has a quick hard wrist shot that he uses well ... an under-rated passer ... make him hard to contain when he is driving to the net ... needs to improve his awareness and positioning ... lacks the offensive upside needed to be an elite scorer

He fits. Versatile and plays all situations. Physical, talented, mature. And he's wears #9. Mikko Koivu anyone?

So not my favorite but I would be ecstatic to see him in a Wild jersey. 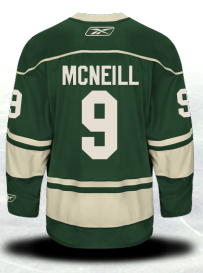