Like Dougie Hamilton, I like center Sean Couturier alot but I don't see him falling so much that he becomes a realistic pick for the Wild. Just don't see it happenning.

Couturier came into the season fighting for the #1 ranking against Swedish defender Adam Larsson. Now, Couturier is ranked 6th by Central Scouting. That's not to say he disappointed or his play regressed. The fact that this draft is so deep and that five other prospects has had amazing draft years is the reason why he was pushed down. But Couturier remains a very good prospect.

He's a big, versatile center that has great hockey sense to play all of the zones on the ice. He's got a good, heavy shot and uses his big 6-3 frame effectively. He is mainly a playmaking forward, able to make quick plays with good hands and vision.

Couturier is seen as safe prospect, with some concerned about his offensive ceiling. Does he have what it takes to become a true #1 center? His skating is also a bit of a concern, with heavy feet and slow first steps.

But his combination of skill, size, and hockey sense will just be too good to pass up. He is a safe bet for a top nine forward in the NHL and teams in the top 5 will look at him closely.

Couturier is a solid two-way centerman with great size and offensive instincts. He can play all situations effectively. He has a strong presence along the boards and in front of the net. He was a member of Canada’s World Junior U-20 team and finished fifth in the league in scoring after winning the title the previous season. He needs to work a little on his overall speed and acceleration.

Slick playmaking center ... big-bodied frame ... has a powerful stride ... big, heavy shot that he can score with ... threads the needle with pinpoint passes ... very good hands and stick ... has the natural vision and creativity to generate offense ... superb hockey sense in all zones ... willingly takes the hit to make the play ... a team player ... average skater; has a slow 1st gear and takes a while to get up to speed ... Doesn't appear to have a high offensive ceiling ... high center of gravity makes him susceptible to being knocked off the puck

a very capable offensive forward who has the size to create space for himself ... has great hands and vision and plays a very solid two-way game ... plays a ton of minutes ... kills penalties,plays the power play and takes all of the important faceoffs ... also not afraid to use his size ... he isn’t going to be a dominant offensive player ... will need to work on his skating a bit

Sean Couturier- Right Above It (via dmarc031)

Fits right there with Mikael Granlund as the team's top prospect. Adding Couturier to the team will just our center position that much more talented.

Excellent choice. He won't be there at #10 though. But if he did fall to the Wild and the team DOESN'T select...ugh...

He's a talented center that plays tons of minutes and in all situations. We don't have that in our prospect pool. 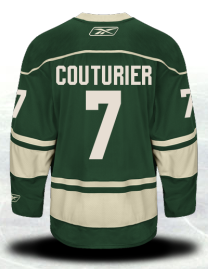