He may be tiny, but Rocco Grimaldi has everything that NHL teams want. The problem is, not only is he small, he's extra small at 5-6 163lbs.

He is extremely fit for his size and has the low center of gravity that helps him compete against bigger players. He's fast, offensively skilled and has tons of character. He has produced at every level he has played at as well.

But his lack of size is too hard to ignore. He may have skills and speed but when there are behemoths in the NHL like Chara, can you rely on Grimaldi? That is the biggest question concerning many and which will keep him outside the top 10.

"He's not very big, but in terms of his ability to make things happen, especially offensively, he's unbelievably dynamic. He skates well and has a great first step. In terms of his skills, he's outstanding. He's someone on our team we look to create offense every game and, without question, one of our most dynamic forwards."

Dynamic, explosive skater with elite speed, edge control and balance ... tremendous passer ... top athlete with pure power, quickness and strength ... sniper with flash-fire release, pinpoint accuracy ... can find open teammates through a maze of sticks and feet ... very good on faceoffs ... genius hockey IQ ... strong for his size ... never stops moving his feet or hustling ... tenacious in his own end ... well below average size ... durability is another concern with him

Easily one of the more skilled players available in the draft ... has a perfect stride ... has quick feet ... owns a very good shot and is able to pick corners ... vision and hockey sense enable him to make good decisions with the puck ... also has a creative side that results in chances ... work ethic and heart are always on display ... only obvious knock is his size

On the wing, in center. We could definitely use a guy with his skills. Has the potential to become one of the more dangerous players in this draft.

Great skill, but can we afford a risky pick like Grimaldi?

He is one of the more athletically fit players in the 2011 Draft which is great to see in a small forward. But we already have Granlund.

At #10, if he is selected, I would fully understand why. His upside is really good. But I prefer some other players in his stead. 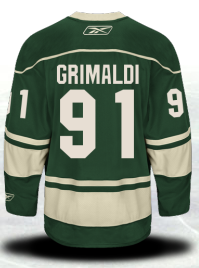