For some reason, I have fell in love with Mark Scheifele...in terms of being hockey player and all...

Scheifele played for an awful Barrie Colts team but still managed impressive numbers. He's a two-way center than can set up his teammates, score goals and can even drive to the net. His hockey sense is what makes him a good complete forward.

He can definitely add some muscle to that 6-2 frame of his to improve his game. Some view Scheifele as a safe pick with a limited offensive upside but honestly, I like everything about this kid, that makes me wonder if he had more upisde than many think.

The combination of a lanky, raw frame as well as being a part of a terrible team gives me hope. Scheifele is going to be given TONS of minutes playing at all different roles and when he puts on some muscle, he'll become extremely dominant. It doesn't hurt that Aaron Ekblad, the upcoming and potential OHL superstar, is joining Scheifele in helping carry the Barrie Colts.

In addition, Scheifele showed some of that upside when he played for the U-18, being named one of the top 3 players on the talented Canada team.

But again, I had to cut my list down to only a few players. Scheifele is my last cut.

"Mark protects the puck very well and will take it to the net while fighting through checks. He's got a great work ethic. His Barrie Colts have struggled this season and he has been relied upon to provide offense. He sees the ice very well and his playmaking ability is very good. He gets back quickly and works hard defensively."

Tall (6-3) lanky center has a long stride ... good skater ... has a breakaway/separation gear ... good passer and playmaker ... shields the puck well when in possession ... nice hands and shifty moves make him difficult to defend ... smart and creative ... good character guy and leader ... shot is average ... lanky and thin ... needs a lot of time and dedication in the weight room

was a beast at both ends of the ice ... skating is good for a big guy ... he can score ... can set up teammates ... he'll take the puck and drive hard to the net, and stay there taking abuse ... he's become a physical player who will participate on the forecheck and fight for pucks along the wall ... plays both ends of the ice ... only real negative against him is that some don't really see him having first line talent ... can get even better with added strength and conditioning

At this point through the Prospect Profiles, you would have already recognized that I think most of the top 20 prospects fit the Wild. And its true.

We need anything, and everything.

Very good pick. He gives a good all-round game that the Wild could use.

But sadly, had to cut my list to four prospects. Who you will find out tomorrow! (You already know about Mika Zibanejad). 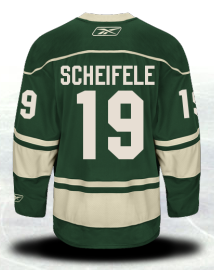