Now we finally reach my final four! You have already (or should have) read up on Mika Zibanejad.

You want an offensive forward that can that flashy factor that the Wild have been missing since Marian Gaborik? Strome is your guy. I'm sweating just watching that YouTube video below.

An extremely talented center, Strome can undress defensemen with his one-on-one ability and speedy and elusive skating. He also has a solid shot and great vision and can make his linemates better with his playmaking skills. In addition to his offensive skills, his two-way play is decent. Off-ice, he has a great personality which will work wonders with teams interviewing him.

His flaws including bulking up and working on his consistency but honestly, everyone 18-year old prospect has similar problems.

Strome is just such an exciting player to watch. While not as complete as Gabriel Landeskog, Strome is still very well-rounded and if picked by Minnesota, will excite everyone for years.

a highly skilled forward with some of the craftiest hands in the crop ... demonstrates great skating ability ... an uncanny ability to make all his moves at top speed ... owns a great shot ... has a pretty good release on his wrist/snap shot ... at his best with the puck on his stick ... competes reasonably hard ... willing to step in and defend both himself and his teammates ... very weak and easily muscled off the puck

Highly creative center who makes everyone around him better ... high-end offensive talent ... excellent skater who can beat defenders with his speed or elusiveness ... hard shot with an NHL-caliber release ... very soft hands and superb puckhandler ... quick stick and sublime hands for making gorgeous passes or scoring memorable goals ... can stickhandle into traffic with ease ... smart defensively with the instincts to play effectively in all three zones ... a hard worker who doesn't have any real flaws to his game ... high character kid who has a good sense of humor ... needs to bulk up and get stronger ... can go stretches where he is uninvolved when playing defensive hockey

Strome is an absolutely electrifying offensive player ... can make moves at top speed ... a very complete offensive player who can really wire the puck ... willingness to take the puck to the net ... works hard in the offensive end ... tenacious away from the puck and goes hard into the corners looking for loose pucks ... need to improve his two way play in order to play center at the NHL level ... could also stand to add another gear to help create even more offense off the rush

Ryan Strome - "The Unnatural" (via YanthaCanada)

Right there next to Mikael Granlund.

But if the Wild want to continue developing Granlund as a center, having two exciting centers is also an interesting idea as well.

I have him being taken before the Wild so if he's still there at #10, he will be one hard prospect to pass on. 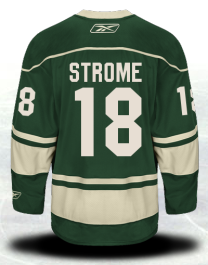