Many may not want a defenseman picked with the Wild's first round pick but I'll repeat myself: the Wild lack everything, including a bluechip puck moving defenseman, which is what defenseman Ryan Murphy is. The Wild lack offense from the front AND back end.

When you look at his stats, you would think you were looking at a forward...

He's shift, speedy, mobile, and has all the offensive skills to really control the game. He has a very good array of shots and has the hockey sense to know what to do with the puck. Defensively, he positions himself in good spots and uses his stick.

However, the reason that is concerning many about Murphy is how far can he continue improving his defensive game. His average size isn't exactly what teams want in their defensemen, especially when you have powerforwards like Rick Nash and Milan Lucic bulling their way to the net.

But hey. We've seen what mini-Jared Spurgeon can accomplish. Now add Murphy's offensive upside to that mix and you get one hell of a dangerous player.

"Ryan's work on the power play is outstanding, He sees the ice very well and is creative, [has] excellent passing ability and a great shot that he gets through to the net. (He's) also an excellent all-round skater. He's got real good mobility. He's a bit of a gambler. He does move the puck well, but he's going to have to concentrate on making good plays."

The most skilled prospect at the defense position in the entire 2011 draft ... amazing speed, elusiveness and balance ... as pure gunslinger from the backline as you will find ... possesses a true bomb from the point that is hard, heavy and accurate ... super passer who can make every breakout with ease ... excellent puckhandler ... quick, active stick to deny players ... solid positionally ... hockey sense is simply off the charts ... a leader and very high character player ... with Murphy it's all about the size and strength issues

Dynamic is the word to use ... dynamic offensive ability, his high end hockey sense and drive to constantly improve ... has that innate ability that allows him to dictate the pace at which the game is played ... patient with the puck and almost always creates a scoring chance from his rush ... poise with the puck ...

As our top defensive prospect.

Not only that, arguably one of our top offensive prospects as well (challenging Mikael Granlund).

But the Wild have had terribly history drafting offensive defenseman in the first round. A.J Thelen busted. Nick Leddy turned into Cam Barker, which also looks like a bust.

But the past says absolutely NOTHING about the future and Murphy is a dynamo that the Wild cannot pass on. 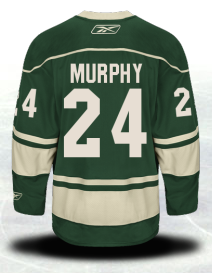