Last but definately not least, is Swiss winger Sven Baertschi. You wanted a winger that can take Mikael Granlund's passes and snipe that on net? Baertschi's your guy.

He is a shifty winger with good playmaking skills and great vision. However, his true strength is his ability to score. His wrist shot is very accurate and strong, and can seemingly score from anywhere on the ice. He is also a very good stickhandler, and doesn't mind playing with some grit.

However, like many goal-scoring prospects, his defensive game comes into question. Baertschi tends to shy away from going into the dirty areas and at the NHL level, sometimes you just have to to get the goals. You can't always rely on your shot.

Nonetheless, Baertschi has is a great kid and if he focuses on improving his two-way play, he would be a perfect fit for the Wild

Quick, skilled, very fast type of player... I don't think anyone can stay on the ice as long as he does. We have to tell him to get off the ice 45 minutes after practice ends. He stays out there forever to work on his game. He works on inside-outside moves, quick shots and little foot movement.

Swiss sniper can really put the puck in the net ... excellent skater who can explode to top speed in just a few strides ... has a heavy, accurate shot that he loves to rip coming off the rush ... got a quick stick and has a vicious little shot ... very good puck skills ... a solid kid who is passionate and plays with a lot of natural exuberance ... he does have a tendency to play a perimeter game and stay away from the dirty areas of the ice ... one-dimensional

Sven Bartchi is an all around dynamic offensive talent ... is strong on his skates and is very tough to knock off the puck ... very good shot, with a quick release ... a strong passer ... has excellent hands, deftly able to stickhandle through heavy traffic ... a smart player, able to read plays and set them up effectively and seemingly effortlessly ... plays the game with an edge ... biggest knock on Bartschi is his two-way play ... needs to continue to get better defensively

You wanted a goal scoring prospect? Here he is.

Probably the most realistic pick in my view at #10. I have Ryan Murphy, Ryan Strome and Mika Zibanejad picked before the Wild but if any of them fell to the Wild, it would be a long discussion between them and Baertschi.

So yes, some may disagree with me but I love Baertschi at #10. 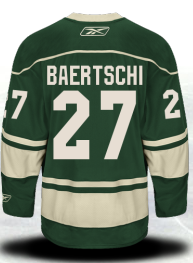