I'll bet you anything that which ever team picks Tyler Biggs in the first round, that team's fanbase will flood the message boards with negative comments.

Okay, that situation was a bit different, and yes, we're still waiting to see the rewards from the trade up, but when all is said and done, Biggs is a pretty safe bet to becoming an NHLer. If you are picking late round, Biggs would not be a bad idea.

He has NHL size, has the character, and has the skating, all which will translate pretty well into the NHL. How well is the question.

His offensive skills and hockey sense is in question and some are expecting something flashy after seeing Biggs's (not sure how the English works for that...) midterm ranking at #5. Personally, I find it a bit unfair for him, placing expectations that realistically isn't suited for him. Biggs is a big powerforward that will hit and power his way to the net. He'll create space for his teammates with hits and will play defensively very well.

Drafting is a mix of reward and risk, and Biggs is the type of prospect that weighs more on the low risk/low reward side than the high risk/high reward. At #30, Biggs is not a bad choice. All he needs is experience.

"He has that leadership quality … that desire, that passion, that competitiveness. He just never quits. He's a young player who has taken the role as leader of his team. He does most of their fighting when they have to fight. He's kind of the guy that when someone starts picking on somebody, he's standing up for them. I think while wearing the 'C' may have taken a little away from his offensive finish, my gut feeling is that I can't think of anything else but an uphill path for Tyler."

"He's a big, strong kid and is an extreme character player. He skates well and is physical and tough. He shoots and attacks the net well with or without the puck. He's certainly someone on our team who's a physical presence, and he makes room for a lot of our skilled players

a power forward ... can skate, hit and fight ... a powerful skater ... powerful shot ... can bull his way to the net ... very good at protecting the puck ... can play defensively, is tough and works hard at his game ... good leader and plays a determined style of hockey ... momentum changer when he's banging bodies and making room for his linemates ... doesn't have elite skills and the hockey sense is questionable ... doesn't have great hands

No. We got Gillies, and he's awesome. He is my favorite prospect and we don't need another physical prospect drafted in the first round replacing him.

Although, having two bottom lines made up of Gillies, Brodziak, Clutterbuck, and Biggs would definitely be a sight to behold.

Plus, we need offensive talent. We need talent that will develop into either top six forwards or top pairing defensemen.

Plus, I think Wild fans have had enough heart attacks this season. 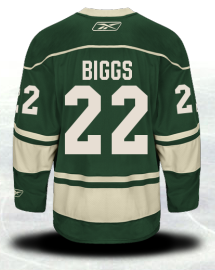