While Ryan Nugent-Hopkins and Jonathan Huberdeau both have concerns of whether they can fill up their frame and be in NHL-ready shape, Gabriel Landeskog comes in ready to play.

He may not have that flashy offense that many would love to see in a top five pick, but Landeskog just has everything else that its hard to pass him up.

Landeskog has been captain at pretty much every level he has played at. That speaks tons about his character and drive to play hockey.

He also has a very good NHL-ready body, plays a North American game with grit and edge, can drive to the net and is just a hardworking player.

Now the question is, how big is his offensive upside? He doesn't possess the slippery stick skills or explosive shot some prospects in the 2011 class have. But thats not to say he has none. He has scored 66 points in 53 games which is no easy task.

"Gabriel does remind me of former Kitchener Ranger (and Philadelphia Flyers captain) Mike Richards. He sticks up for his teammates and is as strong at both ends of the rink as any player in the draft this year. He competes as hard if not harder than anybody. He's got all the assets that you need to be a team leader and, for a potential No. 1 overall, that's what you would want."

"He is a good-size guy who is solid on his skates, not afraid to take the puck to the net or battle for it along the boards. His skating is very good in all areas. He plays the game with so much passion, he plays the game hard, he's a great mentor for players that are younger and older, maturity beyond his years. (He) doesn't need one game in the American league next year -- he should step right into the NHL. I think the team that gets him next year is going to get a player that helps them win a Stanley Cup."

the total package ... good skater with a long, powerful stride and strong balance ... good four-way change of direction ... he can fire the puck off the rush ... possesses an accurate shot ... good passer and unselfish ... plays with an edge, but isn't an undisciplined player ... physical presence who relishes the hitting aspect of hockey and won't hesitate to fight if the situation warrants ... his character, intelligence and attitude are beyond his years ... has a lot of upper- and lower-body strength ... potential offensive ceiling may not be quite as high as others ... could stand to improve to get a little faster out of the gate ... shot isn't overpowering

Gabriel Landeskog - Get out the way (via YanthaCanada)

Right wing prospect with good offensive talent and great everything else.

If Landeskog falls to #10 (which won't happen but thats what everone said about Fowler), the Wild will HAVE to pick him.

He may not have the dynamic offensive ability present in guys like Huberdeau or RNH, but he has everything else. He has physical presence, character and his offensive ability isn't something to be ignored either. 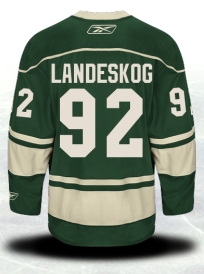