The Russian factor will never go away. Even if he is already in North America, teams will always worry. Still, Vladislav Namistnikov has some dazzling skills, as evident in the video below.

He skates very well, has good offensive instincts and doesn't mind driving to the net.

What differentiates him from being a mid-round first rounder to a second rounder is his inconsistency. His dazzling puck handling skills I mentioned doesn't seem to show up all the time. His lack of strength can also attribute to that inconsistency.

Now, if you have a last first rounder, would you take the gamble?

"Vlad plays a high-energy, two-way game he's very aggressive on the forecheck and backcheck and has the ability to beat defenders outside and cut back to the net. He has an excellent wrist shot that he can release with accuracy on the rush. "I find him most effective at center, but he is versatile enough to play a solid game on the wing, he's very responsible defensively and is not afraid of getting involved and battling for pucks. He'll take the body and take a hit to make a play."

Namestnikov plays a solid pro two-way game ... very deceptively quick ... has some great feet, vision and flow to his game ... a very crafty player ... his playmaking ability is definitely his biggest asset ... has the stickhandling ability to slow the game down in the offensive end ... is patient enough to allow the right play to develop ... has the vision to find open teammates ... has some feistiness to him ... very inconsistent ... slightly undersized, and lacking a pure dynamic ability in his gam

Namestnikov is a smooth skater who can move up and down the ice fairly effortlessly ... a very creative player ... a very good puck mover ... great with the puck ... makes a lot of nifty little plays ... capitalizes well on any opportunity and can find holes in the defense ... makes a lot of smart decisions with the puck ... other qualities come in the form of being a very good stick checker and having great anticipation ... lacks a lot of strength

He can play center and right wing.

We have seen what inconsistency can do to a prospect (Benoit Pouliot). He may be skilled, but there are 5+ other prospects that have similar skill levels at #10 but also brings in a consistent game. 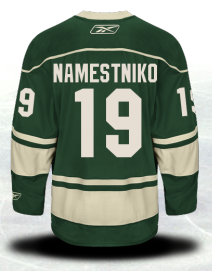