J.T Miller confused many earlier on the season. He has all the tools: skating, size, offensive skills, defensively skills. However, the points never came for a prospect that was so highly regarded.

Now, all of a sudden, in the U-18 Tournament, he finally started to produce the way he should with 13 points in 6 games. He kept his game simple and things started to happen.

However, was it too little too late?

He will going to the well-known University of North Dakota next year and will have time to find that consistency. But on draft that is only around 2-3 weeks away, some teams will be scared off of him as a prospect. On the other hand, some teams picking mid to late round will see his tools and have faith in that Miller will continue his performance from the U-18s throughout his college career and into the NHL.

has all the physical tools and skills to be a high-end NHL prospect ... very good skater with acceleration and agility ... very good stickhandling skills and a nice array of shots ... a slick puckhandler who can make an array of moves ... has the vision to make pinpoint passes, and is a fine puck distributor ... he's always willing to throw a hit or take the hit to make the play ... he's got to work on tendency to disappear for stretches and resist trying to get too cute with the puck in the offensive zone

reliable 2 way forward ... a very strong, powerful skater ... uses his speed to help him both offensively and defensively ... possesses the puck skills necessary to contribute offensively ... as the ability to get to loose pucks as well as separate the puck from the carrier seemingly at will ... has strong puck skills ... an extremely hard worker ... is very dedicated to his end of the ice ... lacked that consistency leading to questions about his hockey sense

Apparently, he can play right wing as well.

I guess this is getting little redundant for many of you, but he's a forward with offensively skills. Might not as be as flashy as others but the Wild need something.

To continue the question, is it too little too late?

I like from what I hear about Miller. But one good tournament is not enough for me to pick him as high as #10. Now, if we were picking #20 or #30, then I would consider.

But with the #10, we have better options 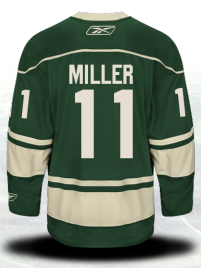