If you remember, we have a standing bet with our friends over at Silver Seven about the outcome of the AHL Calder Cup Finals. With the Aeros currently down three games to two, and game six tonight in Houston, we'll take any advantage we can get to get this team back to even and force game seven.

Thus, when our even better friends at The Third Intermission found out the Binghamton has already planned the parade route, and worse, released it, we had to be sure to tell the story. Now, we aren't superstitious here at Hockey Wilderness, and believe the game is played on the ice and that the hockey gods are benevolent and loving, we still think is bad form on behalf of the city.

The team has nothing to do with this, or at least so they say, so we'll give them a minor pass for now. Hopefully for the BSens health, the hockey gods really are benevolent and loving. Especially since no one in Minnesota or Houston has released a celebration parade plan today.

Let's go Aeros. Force it to seven, guys. No sense letting the ride end now, right? There's nothing like it.

Here is a screenshot, via T3I: 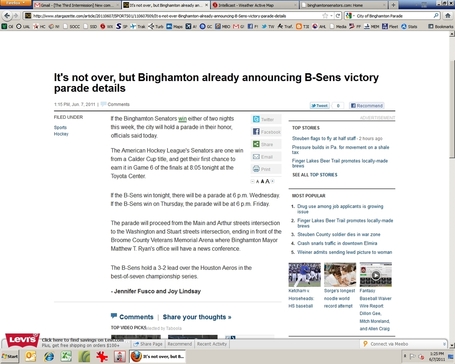