We have seen this before.

But his offensive game is impressive. Can control the pace of the game, very elusive, has a wide range of above average shots and good playmaking skills. Has the frame to protect the puck well and if he added some mass to his body, he can be very dangerous and very dominant.

But how will teams take his bust factor? Will his offensive talents be enough to make him into a top 15 pick or will his inconsistent play scare enough teams to fall into the end of the first?

Instinctive offensive player who can control the pace of the game in the o-zone ... nice-sized frame ... agile and elusive ... fast release on a bullet wrister ... soft hands for giving and receiving passes ... can dominate by bulling his way to the net ... playing a tenacious game in all zones ... inconsistency is the issue with this player

he is a pretty solid two way player ... a very agile guy and elusive ... has some very nice hands and scorers shot ... got a terrific shot and has good goal scoring instincts ... he's an absolute bull on the puck ... balance and ability to protect the puck are outstanding ... play without the puck offensively is still inconsistent ... needs to be more aggressive on the forecheck

has all the tools to be a high scoring winger ... a great skater with a fluid stride ... has great hands ... can really make things happen with little to no room ... can fight through checks ... nice, large frame ... still learning how to use his size to his advantage ... consistency is the main concern in his game ... needs to add more muscle

For a team that is starved for offense, Jensen is one of the best in the draft in that area.

If the team is hoping for a home-run pick, Jensen could be it.

After seeing busts from 2004-2009, and seeing two high risk picks (Benoit Pouliot and A.J Thelen) crash and burn, I don't think I will be very comfortable seeing Jensen picked at #10.

I will understand why because his offense is very attractive. I just don't like the bust factor in him. Its too unsettling and with only one blue-chip prospect in our system, I don't think the Wild should take the gamble. 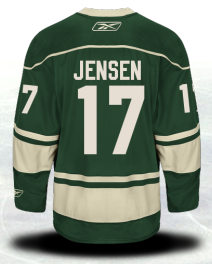