A guy who seems to be above average in everything aspect of the game but not overly dominate in any of them, Beaulieu is an interesting prospect.

That is probably why there is such a difference in opinion on Beaulieu. While other prospects have areas that they dominate in, Beaulieu seems to just play good, solid hockey. He has a solid shot that he can get to the net, knows how to move the puck up the ice and even has a nasty edge to him.

Some hoped for more numbers after playing with a star-studded cast of Saint John Sea Dogs players but he still leads the team in scoring by defensemen with 45 points.

Now the question is, will he develop into a puck moving, two-way, first paring defenseman or will he become a defenseman who is only average in everything?

More of a puck mover than a puck rusher ... solid agility, edge control and footwork make him effective in all zones ... offensive instincts are solid, with vision, recognition and the ability to make decisions under duress ... has a big shot ... good wrist shot ... quick stick and exhibits good gap control ... strong passer ... capable defensive player ... an underrated, even nasty fighter ... got off to a slow start offensively ... need to tweak mechanics in his shot

"He'll be an offensive-defenseman … he's a good skater, good puck-mover. He has a good shot and is very poised with the puck. He's a veteran who has a lot of responsibilities for Saint John."

The idea of adding a potential defensive prospect that plays a similar game to Brent Burns is very intriguing.

He brings in an offensive game and nastiness that most of the Wild defensive prospects lack.

If we need offense, and we decided we'll get it from the blueline, Beaulieu could be our man/kid

There are some people that think of Beaulieu as a top ten pick while others seem him more of a late rounder. I'm the latter.

I think he is a good prospect, I just like a few other prospects better, espicially some of the forwards that will be available at #10.

Would not be disappointed because we need offense and he has a good puck-moving game. But, again, rather see a forward selected because there are a number of them available at #10 that can potentially deliver similarly, if not more, impact to the Wild as with Beaulieu. 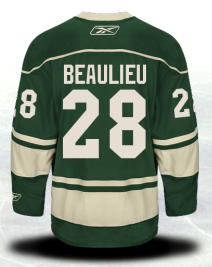