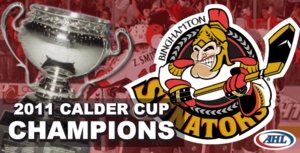 We at Hockey Wilderness are nothing if not men and women of our word. We made a bet with the fine folks at Silver Seven Sens, the SB Nation Ottawa Senators Blog over the outcome of the Calder Cup finals between our Houston Aeros and the better, more powerful, thoroughly superior Binghamton Senators. The bet consisted of the loser being forced to change their tagline to something of the winners' choosing as well as a congratulatory post. In case you hadn't noticed, our tagline has in fact been updated, and here is the congratulatory post.

In the series against the Houston Aeros, the Binghamton Senators showed just how deep the Senators organization really is. Calder Cup playoff MVP Robin Lehner should be given an NHL shot sooner rather than later, and despite most of the big guns not factoring in the decision, the BSens still found a way to win the Cup. The future is bright in Ottawa, certainly brighter than the current state of affairs (sound familiar?). Players such as David Rundblad and Jared Cowen helped Lehner shut down the Aeros, and stop many of the best chances from being capitalized on. If the development of the defensive prospects continues, the Sens could have a deep blueline in a couple years or could use some of that depth to trade for help in the forward ranks (sound familiar?).

Congrats to the Senators organization, the BSens themselves, and to Sens fans. The better team looks to have won. We look forward to the rematch next year.

I think to sum it all up, I'll simply leave it to the great Happy Gilmore.