Through a partnership with Wikileaks, we here at Hockey Wilderness, receive emails from reporters around the country with reports they have filed that their editors deem to be unfit for publication. Sometimes, it is a numbers game. A newspaper only has some many column inches to work with, TV news only has so much airtime and so on. Those stories normally fall by the way side, and are quickly forgotten.

Some become the stuff of legend after falling into the hands of conspiracy theorists or late night television on the History Channel. Regardless, some things are simply too difficult to believe without seeing them first hand.

Today, we bring you a report from the Associated Press that could rock the very foundations of Minnesota hockey. Some discoveries are simply too much for some readers, so we suggest that readers with squeemish stomachs and or those with heart conditions not proceed past the jump. Viewer discretion is advised.

With the warning issued, here is the latest article received from a terrified young reporter at the Associated Press.

St. Paul, MN - Contrary to popular belief and expert opinion, video documentation of the elusive "goal" has been obtained by none other than Minnesota Wild head coach, Mike Yeo. While at first thought to be merely a fable told to children, Yeo argues that this is indisputable proof of the goal's existence.

"I was sitting, thinking, and I flipped on the TV and there, as if sent by a power not of this earth, was a hockey puck striking the back of the net." Yeo continued, "I mean, we have all seen the puck, the net. That is normal. But to see the puck, the entire black disc, striking the back of net. I have never seen anything like it. It was...it was, indescribable for sure."

While Yeo plans on presenting the footage to his squad as early as Tuesday morning, not all in the Wild organization are as convinced as coach Yeo. "Ya, I heard Mike talk about" muttered owner Craig Leipold on his way to a meeting with the Board of Governors to discuss realignment. "I mean, look. This is the State of Hockey. If we, I mean, you know, real hockey fans haven't seen this, what is he calling it again? A 'Goal?' Yeah, if we haven't seen a goal...I'm thinking we can file it under the same grouping as Bigfoot and Area 51." 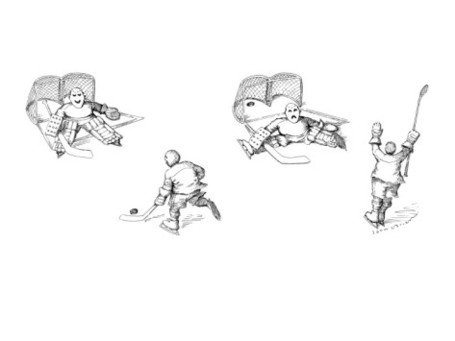 Artist's rendering of a "goal," as described by Wild coach Mike Yeo

Some players however, respectfully disagree with the team owner. Wild goaltender Niklas Backstrom added that not only does he believe in the goal's existence, but he remembers seeing it first hand back in Finland.

"As a young man, 18 or so, I remember seeing one in Helsinki." Backstrom pauses, takes a moment to collect himself, "it was odd. Tough to describe. It happened so fast, it was there, then, it just uh, it was over." Fellow teammate Pierre-Marc Bouchard echoes Backstrom's sentiments. (Note, all comments from Bouchard are sic.) "Back in le juniors, I reemembear a "but." That is, of course French for goal. I was there on dee ahhh, forecheck, and the puck it well...I reemembear it fuzzy since le concussions. But I remember seeing it, and it was something to behold."

Regardless of the personal takes and opinions on the situation, one thing remains perfectly clear: we here at the Associated Press demand proof. If coach Yeo is so confident that he has genuine proof of a goal, why not share it? Why wait for tomorrow coach? What are you trying to hide? Coach Yeo had one retort to this reporters' prying, "you know, there is a process to everything. Right now, with this footage, it may not be the right time."

Few can guess what the outcome will be if and when the Wild players are shown this video. There may be confusion, or fear. Some may feel disgusted, while others leave enthralled. The questions remain: If coach Yeo has this mythical footage, why did it choose him? And more importantly, what does he plan to do with it?

Requests for interviews with Gary Bettman, Commissioner of the Nation Hockey League, and Brendan Shanahan, Department of Player Safety were not returned immediately. With the new found focus on player safety, surely if something as dramatic as a puck striking the back of the net is not considered dangerous, what is?

(Stick tap to Mr. Mike Bennett for this wonderful piece of humor.)