I waited until the very last minute to write this because when I woke up this morning, I had notifications in my email that Rob Nolan, an ECHL goalie, had been called up to the Aeros.

Turns out, as you probably know by now, Matt Hackett was called up to the Wild because Harding has a minor injury. Okay, fine. Not nearly as interesting as a trade, but whatever.

Also, this Nolan kid is a stone cold fox, so mama's happy. Tweak away, Hards.

Anyway, that's the NOW... here's what led up to it: Badness. Just bad bad badness. I don't have to explain what that looks like, though, right? Wild fans know it well.

After a solid, but losing, effort in Milwaukee last Tuesday, the Aeros were Abbotsford, BC-bound. Abbotsford is an hour or so east of Vancouver so it's basically the hinterlands of AHL hockey with no other teams anywhere close to it.

With call-ups, injuries, and suspensions, the Aeros were down to 16 skaters in Friday's game against the Heat. As usual, they had a poor start and got in a 3-0 hole through the first 2 periods.

Then Jon DiSalvatore scored twice for the Aeros to bring them close, but even out-shooting the Heat 10-1 in the third period, they couldn't tie it up.

DiSalvatore again had the only goal for the Aeros in Saturday's nasty rematch, and the Aeros lost 4-1 (3 PP goals between the two teams). Hackett, getting the back to back starts, got the hook after less than 8 minutes, allowing 2 goals on 7 shots.

And again the Aeros played with a short bench, at 17 skaters, but with Broda's game misconduct for head-butting (of all things) late in the first, it was back to 16.

Check out this rap sheet: 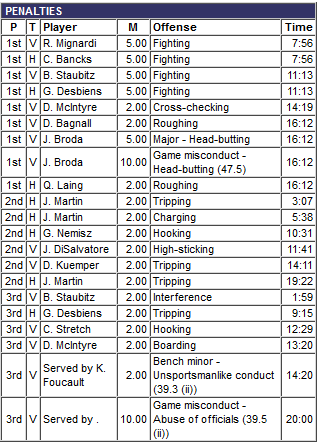 That last little bit, I won't guess at what specifically happened, but I'd wager the ol' coach got a gourd full of the officials. Regardless, it was a very ill-mannered game and that doesn't serve the Aeros style very well.

So, now they're back home and have a nice chance to press the Reset button before tackling a couple more in-state division rivals. The Texas Stars up in Austin are in the basement and the Aeros can gain some much-needed confidence and traction with a couple of wins over those guys this weekend.

Next time we speak, the NHL will be past the trade deadline, but the AHL will be in a weird period right after it where deals for guys on AHL contracts can happen up until March 5 at 3 p.m., when AHL teams have to declare their 22-man Clear Day Roster.

Only those players included on a team’s Clear Day list are eligible to compete in the remainder of the AHL regular season and in the 2012 Calder Cup Playoffs, unless emergency conditions arise as a result of recall, injury or suspension. Teams may also add signed junior players or players on amateur tryout contracts, but only once their respective junior or college seasons are complete.

The American Hockey League has their clear day period set for 3 p.m. on Monday, March 5. At this time all AHL teams have to submit their clear day roster to the league office. After this date the NHL teams are allowed up to four free recalls or can call up a player at any time under emergency conditions. After the AHL team submits their clear day roster they are only allowed to make changes to their roster under emergency conditions, and these new players must come from a lower league. AHL teams are also allowed to bring in college or junior players whose season is over and they are allowed to play at anytime during the clear day period. If you recall Springfield did this last year with players like Aaron Bogosian, Wade McLeod and Paul Dainton.

So there ya go. A little AHL learnin' for ya. Heck, I have to remind myself of the rules every year, they can get so convoluted.