You ever watch a hockey game and think "man, this is awesome. the level of talent and skill on the ice is astounding. Every shift was exciting, bringing the crowd to its feet time and again."

Well, today was not that game.

Today felt more like shooting heroin only to find that you couldn't get high anymore, at least according to Mark Renton. Now, can anyone explain why Jesus is stealing this guy's drugs? I didn't know Christ chased the dragon. 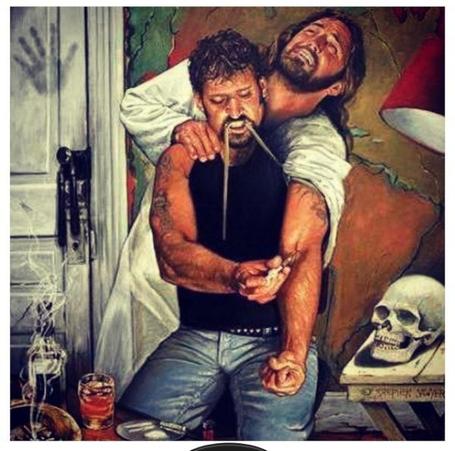 The Hurricanes got up early on a pretty soft goal for something called Drayson Bowman, followed by a decent fight between Brandon Sutter and Nate Prosser then a goal for Kyle Brodziak from Steven Kampfer and Tom Gilbert followed by Nick Johnson scoring from Brodziak and Marco Scandella then Erik Christensen from Brodziak and Cal Clutterbuck only to be ruined (helped) by Drayson Bowman with his second on the night, from Sutter and Anthony Stewart followed by Sutter scoring from Bowman then Tim Brent from Eric Staal and Jiri Tlusty all wrapped up by an empty net goal for Chad LaRose (but should've been credited to Tom Gilbert for a horrendous own goal, whatever).

Bryan and I don't feel like putting in more effort. Have a lovely evening.

The Bennett's Chop & Railhouse Stars of the Game:

Remember, when you begin and end your night at Bennett's, you're the star! Easy parking, drink and food specials and a free shuttle to and from the Xcel Energy Center. Check them out at http://bennettschopandrailhouse.com/.