Houston Hotdish: Are we there yet?

Share All sharing options for: Houston Hotdish: Are we there yet?

Nope. We're not. The Aeros took 3 of 6 available points from the weekend and find themselves essentially in 8th place, barely squeaking into the playoffs, but they have not clinched a spot and probably won't, if at all, until game #76 next Sunday.

They have a game or two in hand on some teams, which is good, but they have also lost 8 of the last 9, so they could still find a way to fall out with a couple more losses here or wins for any of the THREE teams that are right on their tail in the standings.

I guess there are two ways to look at this season:

The glass half full side says, "Hey, there's been almost no continuity all season. Half the team's leadership core that was so important last season went up to Minnesota and never came back. It's a miracle they're even in contention."

But how I (and many) really feel right now is, "This team lacks veteran leadership, and Jon DiSalvatore can't carry the whole team on his back."

I hate to be a bus-thrower-under, but Jeff Taffe has been disappointing since his rockin' week a while back where he got 8 points in two games. There had apparently been a "come to Jesus" meeting with Torchetti and that was the result. 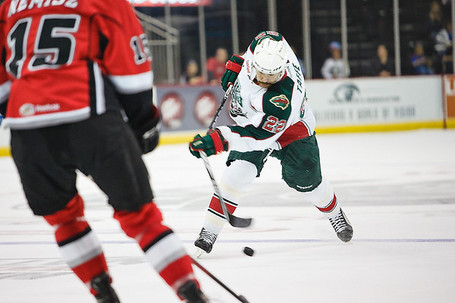 Jeff Taffe snaps his twig on a shot from the point. Photo by Chris Jerina/AHLinPhotos.com

Now, there is a distinct feeling of, "Okay, I've done enough to make it look good," and very little ever since.

It might not stand out so much if his linemate, DiSalvatore, wasn't busting a gut out there trying to make something happen. But lazy turnovers and listless puck protection and lack of hustle stand out like a sore thumb next to that kind of effort.

And with Warren Peters and Jed Ortmeyer, two pillars of clutchiness and hard work every shift, not having been returned to Houston, that really does just leave DiSalvatore and Bagnall as the lone "elder leaders" in the room. Sure, there are a few guys who have been around a couple of years, but they don't carry the veteran weight these older guys do.

So when you have Taffe slacking off on the top line, boy does that put a dent in this team. They just don't have the depth for anybody, much less the most talented guy on the team, to be not giving everything they've got every shift if they expect to be successful.

It's all the more frustrating when you've seen what a player like Taffe CAN do when he's motivated. The Aeros certainly would be in a better position right now if that were the case.

But, that's how she goes sometimes. I do believe Torchetti has done his dead level best to lead him to water, but you can't always make the horse drink.

On the good side of things, Torchetti was very complimentary of Chad Rau and Brett Bulmer over the weekend. Said Rau has had maybe 2 bad games all season, and has been one of his most consistent players. Simply doesn't have to worry about him and he cares a lot.

And Bulmer has stepped right in and fit in so nicely with this team. Speed, grit, hands. As Torchetti said, "He's got the stuff."

He also complimented Nick Palmieri, though I'm not sure I agree yet. He's a big body, he's quick, he's got great hands, but he's a bit of a cowboy. That actually can work in the AHL (and he has 3 goals and 5 points in his last 5 games to prove it), but it doesn't work in the NHL. Just ask Krys Kolanos.

Further, cowboying doesn't work very well in this system. So, while he's a good player, I'm just concerned for him as an NHLer in this organization. Or maybe he just needs more time to adapt his game.

I've probably not made many friends in the locker room with this post today, but I really just do try to be fair and call it like I see it and try to be the eyes and ears of Wild fans and tell you what I think you'd come away with if you were here to see the Aeros play. It's not always pretty.

But the flip side of that is that I'm really excited for next season. Lots of promising young guys coming in and if Fontaine and Foucault and Genoway are any indication, it will be a good time down here getting to watch their games develop as pros. That really is the big reward of being an AHL fan and writer.