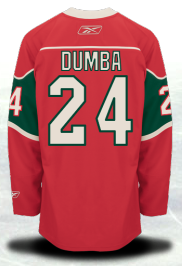 Dumba is a great name for his style, sort of like how Clutterbuck is perfect Clutterbuck.

An explosive dynamic defenseman with game-breaking ability ... incredible raw talent ... he’s a very good skater with a lot of explosiveness ... great on his edges which allows him to have top-end agility on the ice ... one of the draft's best skaters ... able to generate a good top speed ... strong for being just average size and likes to play it physical ... plays physical enough to defend against bigger bodies ... have the ability to make the big open-ice hits ... equally effective throwing hits in open ice and along the boards ... his athleticism is right at the top ... has a hard point shot, considered one of the best shooters in the draft ... has a quick and accurate release on his wrist shot ... appears to choose the right times to take his shot ... makes some nice tape-to-tape passes ... isn't afraid to lead or join the rush ... does a great job of buying time ... has the skills to be a power play quarterback and top two defenseman ... adept at finding shooting and passing lanes ... pinches into the zone and acts as a fourth forward at times ... has incredible poise and patience when standing with the puck on the offensvie blueline ... plays with energy ... possesses an elite level of competitiveness ... has the ability to put fans in the rink with his electrifying style of play and infectious personality ... also has some leadership qualities

Skating technique needs a little adjustment ... ability to handle the rigor of his style of play at the next level could be a concern ... will need to add some muscle to play a robust style at the NHL level ... lack of size will cause him some problems down low and in front of the net ... he will occasionally leave his feet ... defensive play is a little erratic at times ... a risk taker who will cost his team some goals with his over aggressiveness ... needs to work on consistency issues

The Wild is missing a physical defenseman and an offensive defenseman. Dumba is both.

He is also electrifying, a game-breaker and recently served as captain to the U-18 Team Canada team.

So what is the problem?

Defense. Being a Wild fan for quite some time, I've always preferred prospects with good defensive skills and high hockey sense. With Dumba, he is a wizard in the offensive zone but because of his high energetic hitting game, he will often make mistakes defensively.

His style works great at the junior level, but when the players are faster, stronger, and smarter in the NHL stage, will going for the hit rather than making the simple play be more hurtful than beneficial?

Personally, I think he's full of talent, however I do not feel comfortable with his style of play. I feel it is just too risky and rather have a smart and calm defenseman like Jacob Trouba and Griffin Reinhart over Dumba. But that is just me.