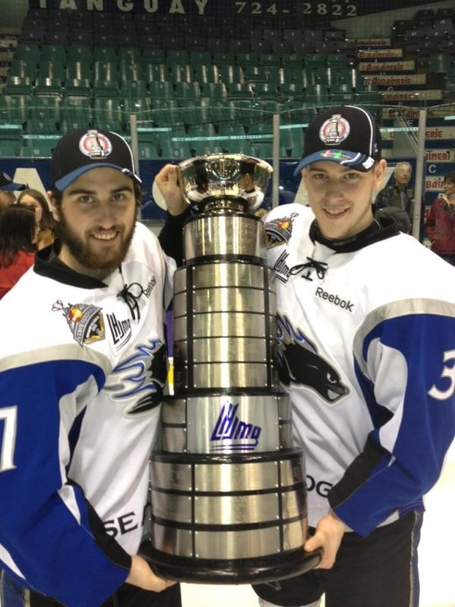 Tonight, the Saint John Sea Dogs won the QMJHL league championship, hoisting a trophy that looks coincidentally like one the two of them would very much like to help the Wild win in a few years. The tournament was barely a blip on the radar for the team, steamrolling their competition regularly, and posting a blow out win tonight.

For the tournament, Coyle put up 34 points (15G, 19A), and was crowned the tournament MVP. With Coyle and Phillips playing in an offensive minded league, it is difficult to gauge how well their skills will transfer to the NHL or AHL, but right now, Wild fans (and the Wild) have to be excited about what these two are doing together. Winning breeds winning attitudes, and these two are mopping it up right now.

The next stop is the Memorial Cup tournament, which sees the CHL's three champions faceoff with an unwitting opponent known as "the guy in the red shirt on Star Trek" to determine the best team in Canadian Juniors. According to Jamie Tozer at Station Nation, that tournament starts May 18, with Saint John's first game on the 19th.

The Wild's prospects continue to win championships, something that only bodes well for the future.

After the jump, a couple must see videos from @Fel0096.

Here is a sick goal from Phillips: