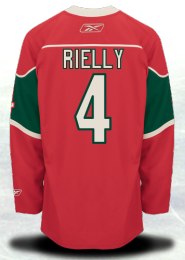 Is it Reilly? Rielly? Relly?

An elite puck rushing defenceman ... is an offensive dynamo ... an elite skater with outstanding all-encompassing mobility ... has great acceleration ... he's very agile ... has good strength and protects the puck well ... not overly physical but will take a hit to make a play ... his offensive ability is right near the top of the class in regards to blueliners ... skates the puck up the ice and leads the attack offensively ... has the ability to take extra risks offensively because of his skating ability ... a top level power play quarterback because of his vision ... soft hands and can dangle a bit ... has great vision and makes accurate passes up to his forwards ... excellent vision and hands around the net ... has a great feel for how to set the tempo for his team ... poise with the puck ... like a chess player; he's thinking one or two moves ahead. He sees stuff coming that a lot of players don't see ... one of the few players in the draft who has another gear ... his creativity makes him one of the top players in his league ... uses a quick stick and positioning to play defensively ... away from the puck he had also grown leaps and bounds ... likes to have the puck on his stick ... competitive

One big question many will have with Rielly's recovery is if his knee injury will effect his skating ... not overly big or physical ... can also over handle it at times ... can be prone to bad turnovers ... will have to continue to refine his defensive play

The Wild is missing an offensive defenseman and Rielly is just that.

An offensive mobile defenseman that can control the pace of the game with poised and confidence. I very much like that sound of that.

The thing that really got me interested was a quote from Central Scouting's B.J. MacDonald where he said ""He's like a chess player; he's thinking one or two moves ahead. He sees stuff coming that a lot of players don't see."

The idea of a chessmaster type of hockey player should be familiar with us Wild fans, seeing how we selected a 'chessmaster' type of defenseman last year in Jonas Brodin. Right now, Brodin is taking those smarts and poise and playing alongside some of the best players in the World, and does not look out of place.

However, this case is a bit different. While Brodin is a genius defensively but lacks offense, Rielly is a genius offensively but lacks defense. He isn't exactly the biggest and he is prone to turnovers. But seeing two sides of the spectrum, what do you think is more valuable in a defenseman, offense or defense?

In addition, his game revolves around his ability to be mobile, and with his injury, there are questions whether he can still utilize his competitive advantage.

In my opinion, I do not like defenseman that are still raw defensively, but seeing how he is the exact opposite of Jonas Brodin in terms of style of play, seeing a Rielly - Brodin would be something great to see (both are left handed but neither have a cannon so we can make it work).