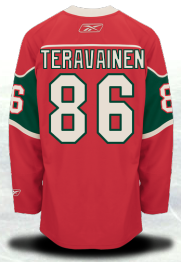 For some reason, it just looks 'right' to me...

A speedy goal scorer with good vision and creativity ... has the talent to score plenty of goals in the NHL if he can handle the grind ... he’s a good skater with an explosive first step and good agility ... good speed ... quick shot release ... brings quickness and skill to the offensive zone ... distributes the puck well on the attack ... good in tight spaces and can be very dangerous when he has time and space ... magnetic puck skills ... on-ice elusiveness ... outstanding playmaking ability ... skill-set makes him a very valuable player on the powerplay ... puck-handling prowess ... has great hockey sense ... creative and calm with the puck ... elite vision ... a very smart player

Needs to improve his balance ... gain strength to take on veteran opponents ... doesn’t have a physical aspect to his game ... could be grittier

The Wild have always missed offense, and Teravainen is an offensive player that would look good with Finnish Mikael Granlund

Every draft, there is a quick riser that surprises people around mid-season. Last year it was Jonathan Huberdeau, the year before that it was Ryan Johansen. This year, its Teuvo Teravainen.

We always wanted a goal-scoring prospect, but that want has seemed to have disappeared, seeing that a majority of the fans want a defenseman.The acquisition of Charlie Coyle and the rise of Johan Larsson, Brett Bulmer, Erik Haula, and Mario Lucia has helped that.

But lets not kid ourselves, all of these prospects are skilled but none are goal-scorers, something the Wild still gravely miss.

Teravainen is a goal scorer, he's Finnish, and he's good. However, he's more than just a goal scorer. He can handle the puck well, dish passes out effectively, and plays a decent defensive game as well. He's got the all-round package and has a strong selection of offensive talents. However, the part that is missing from his game is physicality.

Well, not just physicality, but strength. He is only a skinny 165lbs and while that may suffice on a bigger, European ice rink, it won't last in the NHL.

But while Jacob Trouba is my favorite, I would not be surprised to see Teravainen wear the Wild jersey on draft day.