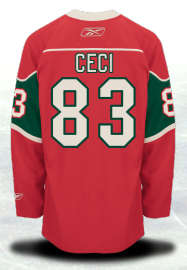 What'd you call me?!

Smart, poised two-way defender with excellent hockey sense ... considered one of the premier defensemen in the entire CHL ... can play some power play minutes as well as penalty killing – he's a minute eater ... logs close to 30 minutes a game ... plays in any situation ... skates well with good feet and solid all-round mobility ... hard to get the puck off of because of his size and strength ... uses his frame to separate the puck ... has a powerful shot and gets it on net ... one of the top powerplay players in the OHL ... has developed into an exceptional puck mover ... pinches deep for scoring chances at the appropriate times ... shows confidence with the puck and generally makes good decisions ... reads the play well and is sound in his positional game ... shows great poise carrying the puck ... has outstanding defensive zone awareness and instincts ...

Skating is all right but still needs some refinement ... inconsistency in using his size to push people around ... a little worried about his inability to use his size as an advantage defensively ... his hands are average - he won't be stickhandling through the opposing team ... not skilled enough to be a top power play guy in the NHL

Again, the Wild need offense. Ceci is second in points scored by defensemen in the OHL, right behind Dougie Hamilton.

If there was one prospect on draft day that I feel could sneak up into the top ten and beat out the more well-known prospects, it would be Cody Ceci.

No one really talks about him but he is a monster prospect. He has it all.

Ceci is big, he's mobile and he's strong. He has a booming shot that he can get towards the net. He can make quick transitions through quick and smart passes. He began as a defensive defenseman but began to develop his offensive game and is now one of the top OHL defensemen. He eats minutes and plays in all situations.

So what is the problem? Well, for a big, strong guy, he doesn't play a physical game. While I could argue that this is simply a playing style argument and nothing to do with talent, it does seem like wasted ability seeing that he stands at 6'2 207lbs, size that could easily dominate players at the juniors, not to mention pros.

In addition, while other prospects still need to fill out their frames and as a result conjures thoughts of "imagine what he can do when he puts on muscle", Ceci is already at prime level. This has some wondering if he already has reached his peak and question how much more upside does he have left, if any.

Personally, I think he would make a great fit on the Wild. I still prefer Jacob Trouba, but Ceci is everything the Wild needs on the blueline. While he isn't a dynamic offensive player like Matt Dumba or Morgan Rielly, Ceci knows how to run the offensive game and has the shot from the blueline Minnesota has been lacking ever since Brian Rolston left (yes, he's a forward but he played the powerplay). And while he has those gifted offensive abilities, he compliments it with strength, defensive awareness and ability to eat up top minutes in all situations.

The combination of Jonas Brodin's slickness and defensive smarts, with Cody Ceci's cannon and strength, seem like a great match.

As I finish this article, I feel like I want to move Ceci up my rankings ... oh well ...