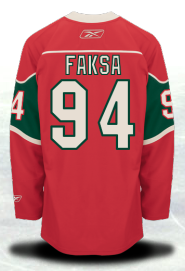 I'm running out of things to say ... all I'll say is Faksa is one of my favorites from this years draft

Plays a power-forward style minus the fighting ... impressive blend of size, skating and skill ... a player who can do many little things well ... big, offensively talented center ... he’s a quick skater ... has great size and does a pretty good job of utilizing it to his advantage ... plays with a bit of an edge ... has size and uses it for all the right reasons offensively ... owns a hard accurate shot with good velocity ... a quick release and a heavy shot ... an above-average puck-handler and passer ... has good hands ... his board play may be one of the best in the draft ... above-average puck protection skills ...very aggressive in driving to the net with the puck ... has presence down low and can make plays in front of the net ... played the point on the power play ... competes hard on the forecheck ... not afraid to play in traffic ... above average hockey sense at both ends of the rink ... has enough creativity in the offensive zone ... he’s able to defend at what I consider an elite level right now ... is extremely diligent on the defensive side of the puck ..a diligent back checker ... best asset remains his overall balanced game ... has displayed improved consistency this year ... competes with passion and a win-at-all cost approach

Faksa lacks a wow factor to his game ... lacks explosiveness in his skating ... would have to improve his foot speed and skating ... still needs to develop his body a lot ... offensive upside of Radek Faska is still relatively unknown

While I love Radek Faksa, the Wild already have a pleathora of talented centers with Mikael Granlund, Charlie Coyle, Johan Larsson and Zach Phillips.

This year it seems that label has fallen onto Radek Faksa.

But for me, I love these character jack-of-all-trades players, especially if that is complimented by size and smarts. Need an example? Think Logan Couture.

In Faksa case, what we have is a smart two-way center blessed with size, smarts and an all-rounded offensive package. He has a dangerous shot, above-average playmaking skills and his board play and puck protection skills is one of the best in the draft. All that offensive potential is wrapped in a nice package with his elite defensive ability.

So why isn't he being considered in the top 5? Because he lacks the dynamic explosiveness many teams would like to see when they are hoping to get a top line forward. Dynamic play often suggests elite offensive creativity and that is what teams in the top 10 picks want, not some consistently reliable two-way centerman.

This is just a personal hunch, but I feel Raksa will prove many wrong. When I look at prospects, I believe the years after the draft is probably more important than the years before the draft, so I look for prospects who have the right tools in the right place surrounded by the right people.

Faksa obviously has the tools, he will continue developing in the top junior league in the world as a top line centerman and will have two more chances to represnt his country against the best juniors in the world, AND he is being coached by the Kitchener Rangers, the team that has produced Jeff Skinner and Mike Richards.

I think Faksa can be one of the better players in this years draft. But then again, its a personal hunch.