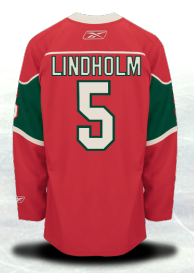 Seriously, I'm out of things to say. There's nothing catchy with Lindholm...

Raw offensive defenseman with top-end skating but questionable play in his own end ... displayed great speed ... biggest asset(s) was/were his feet ... showed a quick, powerful stride and his pivots were outstanding ... backwards skating was strong ... showed the ability to make quick changes of direction ... can play tough and gritty ... isn't afraid of any situation on either side of the puck ... displayed some of the offensive flare ... showed strong puck moving ability with crisp, accurate passes ... a willingness to go below the dots in the offensive zone and was generally good about picking his spots ... good ability to keep the puck in at the point with his skates ... willingness to skate with the puck ... he is smart ... very well-rounded ... does a bit of everything, and does it well ... very mature player

Needs to refine his game that is still rather raw ... a little too aggressively for his size/strength ... his breakout passes were hit-or-miss ... can force things that just aren’t there ... did not look poised when facing the rush ... defensive awareness was not there ... needs to be more decisive and less aggressive in the defensive zone overall ... showed a tendency to leave too much room between himself and opposing forwards ... showed a hesitance towards taking the puck deep in his zone or behind the net to calm the play or restart the attack.

THERE IS NONE! THE SKY IS FALLING!

Again and again, the Wild need an offensive defenseman, and Lindholm probably has the highest offensive potential out of all the defensemen in this draft.

This is where the draft starts to get interesting. My top 12 prospects seem to remain unchanged from the beginning of the season but afterwards, its the wild west.

Because of the large uncertainty with the rest of the draft class (whether that be safe but low upside or high upside but risky), I have Lindholm sneaking into the #13 spot. "Who is this guy, I've never heard of him" you might be asking.

He's a super raw prospect but with a huge frame to fill out and tons of offensive ability. His defensive game still needs work but he is mobile and smart and that will have him in large demand on draft day, especially with recent successes in the NHL like Erik Karlsson.

Lets break it down why I feel he should be rated as high as I have him for the Wild. For one, we love our Finnish and Swedish prospects! I love em, and Flahr seems to love em.

Two, he has huge upside. At this point in the draft, you have a mixture of safe prospects with low upside and risky prospects with huge upside. In Lindholm's case, I saw a mobile defenseman who is extremely smart with the puck offensively. Think Jonas Brodin, but instead of defense, its offense.

Let's not forget he is around 6'3 196lbs, meaning after maybe two years of steak and pasta, he could be at an impressive 6'3 210lbs. While not physical, with that type of frame, he should be able to withstand the grind of NHL play.

His defensive game is very much in question, especially his gap control. However, when I see an offensively gifted defenseman who is slick with the puck, extremely mobile, and is a magician running the offense, I feel his defensive game can only improve as he puts on muscle to his large frame.

Again, the Wild love prospects with experience playing against men (e.g Mikael Granlund, Jonas Brodin, Johan Larsson) and Lindholm has that. He also has a good chance at representing Sweden in the next WJC, and that is always a plus.

To sum up, you have a raw, offensive wizard, who has tons of room to fill out and has every chance to play against top players in the world. With Jonas Brodin becoming a star in Sweden, imagine a future Wild defensive duo of Jonas Brodin-Hampus Lindholm; both mobile, both smart, both with amazing puck and stick skills, but each having specialty in different zones of the ice.

Seems to be a match made in heaven.