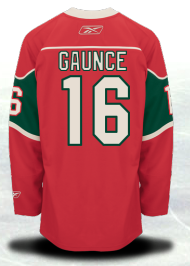 Just to spite the Avs.

A big power centre with strong two-way skills ... has been incredibly consistent this year ... a great direct-line player ... has the physical characteristics that are close to NHL ready ... tough and physically strong ... willing to throw his body around and also drop the mitts ... has a powerful snap shot off the rush ... has a good scoring touch, especially around the net ... hard to contain when driving the net ... a beast along the wall and when he plants himself in front of the goaltender ... winning lots of puck battles ... can both score utilizing a hard snap shot as well as set-up a play ... great hands ... has some strong offensive instincts and vision ... his game is centered around his ability to do the little things ... competes both ways ... knows what to do in his own zone ... is a big game player that rises to the challenge ... intelligent player with a pro outlook ... dedicated to improving his game ... his intangibles are qualities that separate him from others

Gaunce is never going to be the type of player to wow you with dynamic offensive flair ... needs work on his first couple of steps and his agility ... skates with just average speed and lacks jump because his heavy boots ... could use a little more jam in his game considering his size ... not a dangler

If we lacked a center with size and skill and tons of intangibles, Gaunce would be at the top of my list of who I want. But seeing that we already have a guy like Charlie Coyle and to a lesser extent Johan Larsson, I think we should be fine in that department.

Some may see Gaunce as a safe thirdliner who's skating is lacking, making him a very unpopular choice in the top 15 range, but I feel there is more to Gaunce than just that.

While he doesn't play with much flash, his skill with his size helps him create offense when driving the net, continuing the cycle, or just winning puck battles. But lets not forget that he has a solid shot that he compliments his physical play with, making him a dangerous forward in the offensive zone.

All that with his strong character and willingness to improve, I think Gaunce can be one solid player at the NHL level.