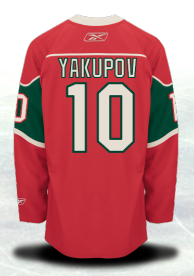 A gifted goal scoring forward ... feisty, dynamic, explosive ... should be able to step into the next level very quickly and continue to progress ... very quick and elusive skater ... explosive bursts of speed ... has the ability to change direction in a flash ... maintains a low centre of gravity ... plays with a healthy amount of energy each shift ... throws his limited weight around and will not back down from physical play ... attacks the dirty areas without hesitation ... pos­sesses a rocket of a shot with lightning quick release ... possesses a heat-seeking one-timer ... understanding of scoring principles off the rush ... possesses natural scorers instincts ... the awareness of where to be on the ice to utilize that shot ... has been good in all three zones ... a true character ... easily one of the more popular players among his teammates ... constantly working on his game ... shows passion and drive on a nightly basis

Lack of size will prevent him from playing a rugged style in the NHL every shift ... tries to do too much with the puck and he could use linemates more at times ... working on the defensive aspect of his game and his play away from the puck

There is not a doubt in my mind Yakupov will go #1. If he doesn't, shame on whoever holds that first overall pick (which right now is the Oilers).

Look at his weaknesses, they are all minor points. Sure, he could use his teammates more often but he's already so damn good by himself. Sure, his defensive game and play away from the puck isn't his niche, but he's solid in those areas and committed to improving them. Sure, he doesn't have a 6'5 frame to endure the physical strains of his feisty play but thats just asking "how good won't he be".

He's a phenomenal skater, he has a deadly shot along with great vision and passing, and loves to play with energy and physicality. He'll get the crowd standing, and he's a great character on and off the ice. Yes, he's a Russian but he is already two seasons in the Ontario Hockey League and is almost guaranteed a spot in the NHL; there is no incentive for him to go back home.

If I sound giddy, forgive me. But I haven't even heard of a prospect like Yakupov before. I feel he has everything you want in a franchise forward and feel he will be better than his fellow first overall classmates Ryan Nugent Hopkins and Taylor Hall.