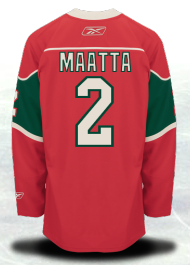 What's the Maatta? (Think I just threw up in my mouth typing that...)

A steady, stay-at-home blueliner who usually makes the smart first pass ... plays a very simple, yet efficient game ... can have a positive impact in all three zones ... a very smooth skater ... a good skater who can launch himself up ice ... he’s got NHL size ... has great range ... ability to play physical when needed ... wins one-on-one battles along the boards ... he has an extremely strong shot ... makes smart first passes out of his zone ... capable of playing the point effectively on the powerplay ... he is extremely smart ... good decisions with and without the puck ... is extremely polished for a 17-year-old ... excellent defensive positioning ... has a nice active stick ... effective at angling opposition ... quite effective at keeping tight gaps in the defensive zone ... competes ... good leadership skills and character ...

Footwork and first few steps need some work ... acceleration and transitional footwork need to be addressed ... he doesn’t play with very much physicality ... he does not use his shot as often as he should ... his offensive upside is questionable right now

He doesn't. A safe, defensive prospect? No thanks.

There is much to like in Olli Maatta, but I think I can safely say, I will disappointed if the Wild selected him on draft day.

Thats not to say he is a bad prospect, he isn't. He just isn't what the Wild need, which is offense from either the blueline or the forwards.

Maatta is a smart and solid skating defensive defenseman. He has tons of interesting physical traits and intangibles. He makes a good first pass, and has a strong shot from the point. In addition, his recent playoff run had him show off a bit off his offensive abilities. But at the NHL level, he isn't going to run a teams offense or their PP, but will shutdown opponents and stop goals. He may chip in a few points here and there.

He is a safe prospect as he is very smart and has a good NHL body already. He also has a wealth of playing experience as a key contributor to his team. But again, he just isn't what the Wild need right now.