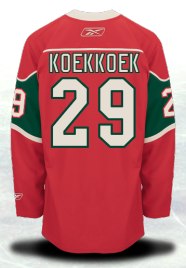 Koekkoek has a tremendous package of size, skill, and potential ... allure to Koekkoek is obviously his high end potential at both ends of the ice ... a great skater with an ability to lead the rush ... a smooth skating defenseman ... has good size ... uses his frame and strength to his advantage ... has the ability to play a physical style of game ... his shot is quick and accurate ... can make great outlet passes ... does a good job of moving the puck ... loves to join the rush ... sees the ice well ... makes good decisions and confidence in his game ... ability to control the game from the back end ... excels in high pressure games ... can be counted on to use his hockey IQ in knowing when to jump up or stay back ... can lug the puck out of trouble ... tough to play against in his own zone ... strong character traits and leadership qualities ... mature for his age.

Still very raw as a prospect ... has some work to do on his backwards skating ... continues to improve his footwork ... still in the progress of filling out his frame ... not a point producer or play creator ... hockey sense is average in offensive end ... tries to do too much at times ... has some issues when he's under pressure ... his defensive game still needs some polishing

Koekkoek is a big gamble and the Wild just don't need that right now.

You may see alot of conflicting things in the above summarize scouting reports above, and there is really only one explanation why: Slater Koekkoek is an extremely raw prospect.

He has all the tools that would make him a very interesting prospect. He has size, mobility, character, and ability to log tons of ice time.

However, each tool he has needs polishing and refining. Although 6-2, he is only 184lbs and will need alot more muscle to dominate physically. Offensively, he makes good outlet passes, has a good shot, and likes the join the rush but at the same time isn't a dynamic player who can control the offense. Defensively, he uses his size effectively but at times does too much.

But if with the proper coach and proper development, Koekkoek can bring it all together and become a fine player. He is really a sorta of a hockey playdo (remember those things?). A team will get a prospect with tons of tools and enough versatility for the team to decide how they want Koekkoek to become.

He will definitely be a fun one to watch on draft day and the following 2-4 seasons.

If you want to see my earlier piece on Koekkoek, here's the link