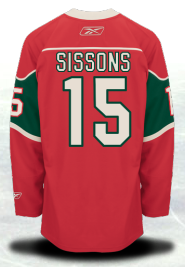 Can you imagine how much crap this guy gets on the ice for his last name?

A true powerforward ... a real good, solid, all-around two-way player ... skates hard ... has good mobility and edgework ... he has a good first few steps ... he’s a big strong kid ... strong along the boards and in front of the net ... plays with an edge ... pays the price to get little things done that aren't always noticed ... relentless in puck pursuit ... loves to lay the body ... a gifted goal scorer ... has a good wrist shot from the slot that usually finds the mark ... slick passes ... has high hockey IQ ... strong anticipatory skills ... high-energy play ... a great three-zone game ... pays attention to detail defensively ... shown a knack for being a hard worker on the ice ... ability to lead by example on the ice ... strong character

Skating issues will need to be addressed ... lack explosiveness in his stride ... his overall offensive potential will be the biggest question regarding Sissons this season

The Wild have plenty of prospects like Sissons already (Charlie Coyle, Johan Larsson) so its fine to pass up on him.

Sissons is my type of prospect, and for that, I have him ranked higher than many people. I mean, what's not to like?

He captains the Kelowna Rockets at his young age, and his hockey development has been a product of his hardwork. He plays with energy, likes to play physical, has a very high hockey IQ, and plays well in all three zones.

While he has decent feet and mobility, he doesn't quite get to very fast speeds nor does he accelerate quickly enough to make himself a danger.

But I love him. He may not be the most explosive player or the most dynamic offensively prospect, he does everything well, does it with hardwork, and with Sissons, you know you are getting a young kid that will work to improve himself.

You can't really ask for much more in the later parts of the first round of the draft.