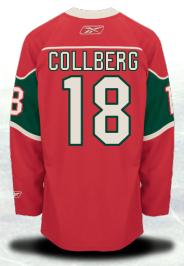 Collberg is one of the most intriguing offensive talents in the draft ... has the skills to compete for a top-six role in the NHL ... great speed ... his shot is arguably the most lethal in the draft ... ability to always be around the puck despite his size issues ... elite offensive skills ... plays with a lot of flair in his game ... a top-notch playmaker ... soft hands ... great one-on-one skills ... nose for the puck ... uncanny puck sense and instincts

A little undersized ... needs to continue to add strength to his game ... defensive zone coverage will need some work ... will need more consistency

The Wild have added alot of two-way talent over the past years but still lack offense, which Collberg is plenty off.

After Nail Yakupov and Alex Galchenyuk, Collberg is arguably the top offensive forward available, something the Wild have lacked greatly.

He's offensively talented, great shot, and he can skate. He plays with hardwork and isn't afraid to play physical.

So what is the problem?

In 41 games in the SEL, he has zero points. To be fair, he isn't very much because pro teams in Sweden prefer to use their more veteran players, but still, its concerning. In addition, it is quite clear, Collberg needs more muscle and strength to compete because often times he gets overpowered.

As Wild fans, we're used to having undersized players, sometimes they work out, sometimes they don't. Collberg works hard and is dangerously offensively, but clearly has work to do maturing and gaining muscle. That is key if he wants to make it in the NHL.