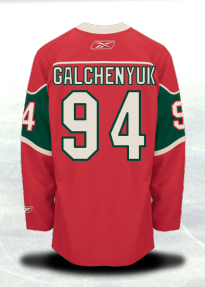 A big, power-forward type winger ... a strong playmaker ... projects to be a playmaker first and shooter second... not overly dynamic, but elusive ... skates at an above-average level ... long looping skater who generates good northsouth speed ...has good agility and quickness despite his stride ... balanced ... a big, ideal frame which projects well ... able to protect the puck using his lower body positioning ... has a great shot and a deceptive release ... owns a lightning quick-release and accurate shot ... can make some impressive pinpoint passes ... soft hands who is good along the wall ... has elite hands and can really dangle the puck ... ability to operate in traffic ... shows good hockey sense and willingness to drive into the dirty areas ... can really can control the pace of the game and can change the speed of the game ... makes quick decisions ... has nice vision ... an incredibly smart-two player ... works hard defensively ... sticks up for himself when the physical play comes ... a competitive streak that is unrivalled by his peers

Missed his entire draft year with a knee injury ... teams may be concerned with how he bounces back from the injury ... first few steps are a concern ... does not possess lightning quick feet ... there were times when he was overdoing it too much by himself

If we left out the part where Galchenyuk is super skilled in goal scoring as well, I think the Wild have enough playmakers.

But that is if we left out his goal scoring abilty.

Originally, I had Galchenyuk rated around #7 because I wondered what effect his injury would have on him, not to mention losing an entire season of development.

But after the scout meeting with several Future Considerations staff, I have been convinced the he has a place at #2. Why? Over guys like Grigorenko and Murray?

Let's pretend he did not have his injury: we would be talking about a prospect with a great frame (6'1 and growing), elite playmaking skill and vision, and is able to use all his offensive skills at high speeds and in tough traffic. He can also play the physical side of the game. In addition, he has great character and tons of passion in his game.

You put the skills and character factors together and you have one hell of a prospect. If teams feel the worst of the injury is behind him, Galchenyuk will make a very convincing #2 prospect.

There were some questions about his initial quickness and speed, but seeing the success of Mikael Granlund, being the fastest isn't everything. What is most important is good skating technique, being agile, and being able to execute plays under pressure, in traffic, and in motion. Galchenyuk can do all that and more. That is why he is my #2 prospect.