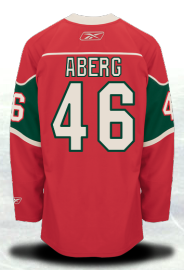 That 'A' in Aberg isn't an initial for his first name, I promise you.

A conscientious two-way player ... a lightning-fast skater ... good balance on his skates ... a strong, natural goal scorer who likes to shoot ... has a quick, heavy wrist shot and slap shot ... a good puck handler ... able to spin away from trouble ... good in tight spaces ... a very creative player ... blessed with very good vision ... someone who brings it every shift with a high effort-level

Not overly large ... his durability may be a concern unless he bulks up even more ... could use his teammates a little more

He fits perfectly with the Wild. He has some great offensive skills, is a Swede, and has been playing in the men's league and doing quite well. All things the Wild like.

But at #7, I think there are better choices.

Started the year on fire, and then started to cool off. Still, he managed to do very well in his first year in the men's league, being a nominee for Rookie of the Year (along with Wild's Johan Gustafsson, and finally losing to Johan Larsson).

Sweden is pumping out some serious talent, and Aberg is a product of that awesomeness. He's a great skater with a dangerous scoring touch. He plays hard, tough, and is reliable in all three zones. Skill-wise, he doesn't have any flaws.

The problem is more about his size and his consistency. He doesn't possess a large frame and that raises concern if he can survive the rigors of NHL play. In addition, his cold second half of the season have some wondering if his hot start was just a fluke. Aberg didn't have a chance to show that it wasn't during the WJC because he was injured in the exhibition games.

Aberg doesn't have the physical tools to be a big contributor on the bottom two lines in the NHL, so he will have to bulk up and refine his game if he wants to be a top six forward. Because its either that, or bust.