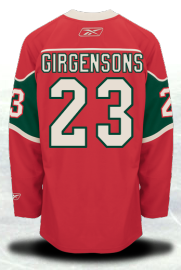 Seen as one of the best two-way forwards available in the draft ... brings a nice display of size, skill, and grit ... strong skater with a smooth and long stride ... possesses great footwork and agility ... protects the puck very well with his body and reach ... tough physical presence in that he cannot be removed from the puck ... has the tenacity, desire and grit ... can absolutely rifle a booming shot to the net ... owns a soft touch which allows him to work magic with the puck ... attacks the net often ... good playmaking abilities ... excellent hockey sense ... strong center in all 3 zones ... tough and competitive ... has an outstanding work ethic, both on and off the ice

May not be a top-two center at the NHL level ... some scouts question his offensive instincts and ability to create scoring opportunities ... still needs to develop his game to be effective at the NHL, but that will take some time

We already have tough, two-way centers who have questionable top six potential.

Here's a player that has seems to have everything but is alot lower in the draft rankings because there are questions about his projected future.

He's smart, plays well in all zones, has a good shot, nifty hands, and plays with grit. In addition, he has good size and skates fairly well.

But in the offensive zone, some question his decision making. He has the right tools to become a threat all over the ice, but as of this moment, he needs to refine his game on the offense if he wants to develop into something more than a gritty third liner.

Sounds somewhat similar to when we drafted Colton Gillies, but a bit more refined and talented.

If I had a pick between 15-20, Girgenson would be a very good pick, but I feel there are just better options with greater offensive upside in the top half of the draft.