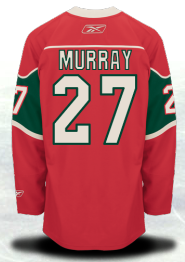 Probably my favorite prospect (not necessarily the best prospect) in this year's draft. He can just do everything

Really the total package ... smart, dependable rearguard ... skating is probably the best in the WHL ... a great skater with excellent lateral movement ... has a very smooth and effective skating stride ... a breathe-taking skater equipped with a 360 degree turning range and glossy pivots ... doesn’t shy away from physical play ... plenty capable of handling himself against larger opponents ... has a good hard point shot ... one of the best outlet passers in this draft ... quick on the transition ... shows some good creativity … moves the puck with short, accurate passes ... while he’s not a dangler he could certainly hold his own in open ice ... cool and calm in all situations ... decision-making on the ice are outstanding ... ultra-consistent and controls the play when on the ice… sees the game well as plays develop around him ... can effectively jump into or lead the rush up the ice ... displays a poise well beyond his years ... always seems to be in the right position ... never gets out of position and I’ve never seen him lose a one-on-one battle …effectively spins off forecheckers ... excellent in his positioning and stick work ... great shot-blocking abilities and sound defensive positioning ... has all of the tangibles that NHL teams love to build around on their blueline ... oozes character and has a plethora of leadership skills ... he does everything so well at such a high level ... has the maturity to be able to step into the NHL next season

not a punishing guy who will provide a physical presence ... would also like to see him be a bit more aggressive on the offensive side of the puck ... his offensive skills may be limited and he may be more of a stay-at home defender

The Wild have Jonas Brodin, Marco Scandella and Jared Spurgeon all looking like the future of the team's blueline but while they are all great, none of shoe-in top defensemen; they all have things they need to improve at.

Murray would come in, potentially right away, and develop into its #1 defenesman.

Although I have Murray at #3, he's more of a #2B tied with Alex Galchenyuk. Although I think Galchenyuk has tons of offensive potential, Murray is just such an impressive young blueliner, its hard to forget about him. Much like last year when people questioning whether Landeskog could be a top line NHL player, Murray has the same doubts but just manages to win at every single level.

See how Landeskog turned out.

He just wins and leads.

He has tons of leadership experience. From the Hockey Writers, there was quote by McKeen’s Director of Scouting David Burstyn saying "Ryan Murray oozes character and has a plethora of leadership skills as he has been the captain of each of his teams since he was 10 years old".

He also is so skilled that he has helped represent Canada at every level, besides the Olympics. He was skilled enough to represent Team Canada U-20 as a youngster, which is very impressive. However, its even more surprising that he is representing Team Canada in the World Championsips along with NHLers Duncan Keith and Dion Phaneuf, and has not looked out of place.

So he leads, he plays at a pro level. The only question is, how high is his upside?

Some question whether he has the offensive ability to become a #1 guy. The way I see it, he can play 25+ minutes on regular ice time, PP and PK and not hurt the team. I call that a #1 defenseman. If he doesn't produce 30+ points but eats up that amount of time and keeps the puck moving, I would gladly use the #2 pick for that.