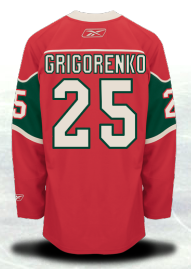 The next Zherdev/Filatov, or can he be more?

big, strong playmaking forward ... elite offensive talent ... possesses the size, strength and skill teams covet in a first-line centre ... skates very well for a player of his size, with a smooth stride ... great size and skill ... not afraid to get his nose dirty ... very difficult to knock off the puck ... ability to protect the puck with his long reach ... drives to the net with force ... can score from anywhere on the ice ... has a strong one-timer and a good wrist shot ... ability to move in traffic with his size ... has great hands for a big man ... has silky smooth hands to dangle around defenders ... taking key faceoffs winning more than he loses ... great tape to tape passes ... makes his teammates better players by controlling the pace of the game ... sees the ice and opportunities really well ... has the patience and the ability to see opportunities and let them develop ... shows that he knows what to do in the defensive zone…

has a strong one-timer and a good wrist shot that he uses far to infrequently ... can go though stretches where all he does is look to pass the puck becoming too predictable ... has to continue working on his all-around game ... will take some shifts and games off ... at times he lacks intensity and consistency in his effort levels ... needs to bring more consistency

Superskilled forward with a huge frame that he needs to fill and lacks consistency ... reminds me of Benoit Pouliot.

If you haven't noticed, I have a grudge on Pouliot, I personally hate players with tons of skill but lacks the drive that is so important in a player.

So while I wouldn't like Grigorenko, he's still super damn skilled and would look really good in a Wild sweater.

Another Russian prospect with tons of skills but character questions.

He's got all the tools to make a superstar NHL centerman; size, reach, skating and offensive skills. He has also proven himself a good junior player, becoming one of the top QMJHL players this year. He was also considered to be a challenger of the #1 spot for this year's draft because he is just that good.

However, if you combine the ideas that he lacks drive as well as him being a Russian, you have two things that would scare many NHL teams.

Now, if you do your due diligence and find that Grigorenko has no desire to head back to Russia AND he actually is secretly passionate with his hockey and his inconsistency is just a result of developing pains, then Grigorenko could go as high as #2. But you have the same doubts as I do and you wouldn't want to risk the pick when you have more sure-fire prospects in Ryan Murray and Alex Galchenyuk, you'll pass on him for the said players.