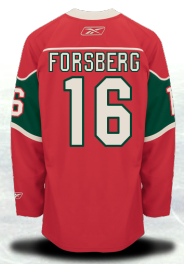 Who would have thought you would see Forsberg on a Wild jersey...

Big, strong winger with power forward potential ... keeps his feet moving and possesses above average speed ... skates well with strong cuts and change of direction ... plays with a high energy level ... not afraid to initiate contact and has the strength to win many battles ... plays the game with a physical edge ... has a great shot with a pro-type release ... has a great set of hands and a nose for the net once he gets the puck on his stick ... makes strong passing plays but looks like a more natural finisher ... adept at protecting the puck from the opposition ... soft hands ... displays good puck skills ... has the ability to make those around him more effective ... is a three zone threat as he plays hard and makes plays both in the offensive zone as well as on defense

Has to work on skating, his stride is a little choppy.

The Wild tons of skilled center prospects in Mikael Granlund, Charlie Coyle, Johan Larsson, Zach Phillips, but who is going to play alongside them?

Yes, Forsberg is a natural center but his skills are easily translatable into a power winger and considering that Granlund is a somewhat small guy, having a 6-2 power winger bulling his way on the side and creating room for his linemates will would wonders.

As I writing these profiles, I am starting to be dumbfounded by the talent there is in the top half of this draft (the bottom half, not so much but we'll get there soon enough). Forsberg is rated #5 but is sounding to be a great prospect worthy of a #2 pick.

The only weakness I could find is that he could smooth out his skating stride and add more muscle to his frame but is that really a 'flaw'? Or is that just the sound of a young kid? To me, its the latter, and with 2 years of development, all your left with is his strengths which is a powerforward with top line offensive skills.

Just to clarify, from what I could gather, Forsberg isn't the physical power forward type. He isn't going to constantly punish the opposing team physically, but he has the type of powerforward that will protect the puck, use his strength to win board battles, and use his body to drive to the net, leaving defenders helpless and perhaps even forcing them to take a penalty, just to stop him.