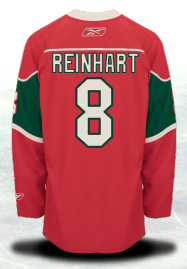 Has the size, skill and skating ability to be a top two NHL defenceman ... not one to steal the puck and go end-to-end on a rush, not prone to going for big crushing hits and taking himself out of position; a strong two-way defender and can help anchor a team’s back-end ... very few 6-4 blueliners can skate and handle the puck like Reinhart ... surprisingly mobile for his size ... isn’t afraid to battle hard in the corners and along the boards ... physical and mean at times ... uses his reach and size to his advantage defensively ... has a hard point shot that often finds its mark ... a great passer with excellent vision ... known for a strong and accurate first pass ... excellent body position in offensive situation and great hand eye co-ordination ... excels at keeping the puck in the offensive blueline while quarterbacking the powerplay ... has a good feel for when to jump into the rush ... equally effective in the offensive and defensive ends ... positionally-strong

Skating is not poor but instead just average ... has developed a clumsy stride ... first few steps that leave some questions ... needs to spend some time bulking up ... continues to be a prospect that you wish just could be physical more often ... a good shot, although he doesn’t use it enough ... more consistent in his effort ... away from the puck is an area that needs continued development in order for him to eventually realize that potential at the NHL level ... does not always play with an abundance of passion and drive ... could benefit from showing more competitiveness and emotion in his game

The Wild are missing a bluechip defenseman prospect. Check.

The Wild are missing a defenseman that is capable on being physical. Check

The Wild are missing a defenseman that can help run the powerplay. Check

A very 'toolsy' type of prospect, Reinhart has tons of skills and physical attributes that make him an interesting player.

First off, he's 6'4 with good reach and decent mobility. If all else fails, Reinhart should be able to find a place on a NHL team just for those attributes.

But don't forget his offensive skills, which is what makes him a top ten prospect in this years draft. He possesses a hard shot that he manages to get to the net, has excellent vision, and makes a strong, first pass. He has great hand-eye coordination and can even man the powerplay.

However, he has a good number of question marks.

For one, he's 6'4, meaning its typical to see a player like him struggle in his skating. While it isn't poor and he is decently mobile for a guy his size, it most definitely isn't Jonas Brodin level. Although he has made excellent strides this year improving that area of his game, will it be enough to survive the quickness and pace of the NHL level?

In addition, for a guy his size, people expect him to deliver consistent punishing hits, or to bully smaller players around. He doesn't do that. In fact, he plays quite laidback with little energy or ... 'umph' to his game. But I question, should that really be a 'flaw'? Sure, you would LIKE to see that in his game, but does he really suffer from it? Is it just criticism over style rather than his ability to contribute? Guys like our very own Jared Spurgeon and Jonas Brodin have not one speck of physicality in their game but still manages to win the puck with stickskills and smart play. Who are we to say only small guys can play that way? IMO, as long as they come away with the puck, through physical hits or sticklifts, its a win.

Like I mentioned before, Reinhart is a very toolsy type of prospect, meaning he will need tons of development time in the juniors to put them together. But at this stage of the draft, there is more hoping and praying that goes into the success of the prospects.

I wouldn't mind hoping and praying with a prospect that has skill and size that could make him a top pairing defenseman in the NHL.