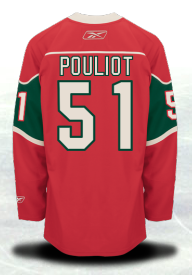 Anyone else throw up just a little?

One of the draft's better puck-rushing blueliners ... a silky smooth skater ... he's not afraid to play physical in the corners and in front of the net ... has a good – if not overly powerful – shot from the point ... shot that he gets through traffic and on net with regularity ... a sublime passer of the puck ... great hands ... likes to join the play and create offence ... ability to finish on the rush ... a future powerplay quarterback at the next level ... ability to play a high tempo transition game

Should to be considered a bit of a project ... can play a little too casually ... will also need to continue to get bigger and stronger to match up against larger opposition ... suspect on his puck moving at times when he tries to do too much ... is susceptible to the occasional glaring mistake ... his ability to defend is still a concern going forward ... still figuring out exactly where he needs to be without the biscuit, especially in his own zone ... sometimes struggles away from the puck ... can be inconsistent with his decision making

The Wild do need a defenseman that can run the PP but is Pouliot's raw defensive game worth the pick?

Zidlicky is a good player, he is doing very well in New Jersey. But he didn't do well with the Wild, and I don't think Pouliot will do either.

He's a smooth skating defenseman that is skilled with the puck, talented in the offensive zone, and an extremely talented passer. He has the ability to control the pace of the game and run the offense.

But his flaws are also glaring. For one, he doesn't have the size or strength to push around bigger opponents. Although we know guys like Spurgeon can survive at the NHL level using their hockey smarts, Pouliot also lacks that ability to cover his own zone. He is still considered very raw in that area.

The draft is more art than science, and I prefer guys that play a two-way game. Some teams may like his offensive game and believe his defensive game will only improve as he matures, but I have my doubts.