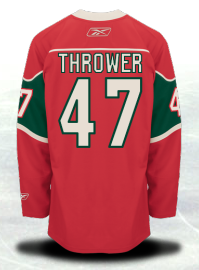 Thrower is a hard-nosed, hard-hitting blueliner ... is a silky smooth and efficient skater ... willingness to use his body on the ice ... is never afraid to mix it up with opponents ... gritty style of play ... owns a rocket of a slapshot ... delivers crisp and accurate passes ... a smart, hard-working kid ... two-way excellence ... will fight any challenger, also excelling as an agitator ... strong leadership ability ... great intangibles

Pretty average-sized ... some will say that he’s not skilled enough to be a natural point producer ... needs to continue to show that he can make quick decisions and show improved decision making ... his defensive play must improve

While the Wild don't REALLY have a physical presence of the blueline, it really isn't the top of our priorities.

Here is a defenseman that plays hard, plays physical, and plays tons of minutes for his team as a #1-2 defenseman. If you are picking around 25-30, Thrower makes an excellent choice.

While he isn't the most dynamic defenseman, Thrower brings tons of intangibles you would love in any player. He brings character, toughness, and passion to the lockerroom, and can agitate the hell out of the other team. He isn't shabby in the skill department either. He has a cannon of a shot, decent defensively, and is starting to discover his offensive side. He skates well, and while not the biggest, he is strong and can mix it up with bigger and more powerful opponents.

Considering there is a lack of high end talent when nearing the end of the first round, a guy like Thrower who skates well and brings competitiveness, physicality and leadership, will be a very smart pick. He brings all these things that you want, but still has a bit of potential of being more than just a depth defenseman. Playing in Saskatoon will give him every chance of developing that potential as he will be given top minutes playing in every and all situations, including the PP and the PK.