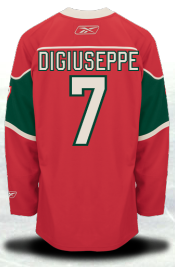 Has all the raw tools to develop into a highly effective power forward ... is a powerful skater and has a quick stride with good acceleration ... a big body that has plenty of room to continue to add strength to ... a sneaky release ... has a good hard shot with a quick release that he uses while driving to the net ... soft hands ... good offensive instincts ... does a good job of creating offense with his speed ... protects the puck well and works the boards hard, usually winning the puck ... tough to contain along the boards on the cycle ... keeps his feet moving and drives into dirty areas without hesitation ... works hard to fight through checks ... competes

He needs to continue to add strength ... could play with a bit more edge more consistently ... needs to keep working on his defensive duties

While Di Giuseppe brings some offense, he really is more of a powerforward that plays with speed and on the cycle. We have that already in Coyle and Larsson, we need some prospects that bring natural offensive skills.

A surprise player during Team Canada's selection camp, Di Giuseppe almost made the team but ended up as a final cut. There aren't many high end Canadians playing in the NCAA, meaning Di Giuseppe did much to impress Canada's coaching staff.

Di Giuseppe has a decent shooting and playmaking abilities but his strength lies in his ability to skate hard and fast, and use his solid frame to protect the puck and win board battles. He drives to the net hard and keeps his feet moving. The combination of size and speed will make him an interesting prospect on draft day.

Considering how well he did this year, he will have a high chance of making Team Canada next year as a bottom six forward. Canada likes to have hardworking and powerful forwards on their bottom two lines and Di Giuseppe fits that bill.

He is still a bit raw but has some tools to make him a decent late round pick. He will spend more time in the NCAA bulking up and refining the rest of his game