This year is a great year for the Wild in terms of prospects. It has never seen such a bright future in their pipeline before with Mikael Granlund, Jonas Brodin, Charlie Coyle, Zack Phillips, Jason Zucker, Mario Lucia and Brett Bulmer all having potential to be core players for the team. Lets not forget the talented goalteding with Matt Hackett as the star.

But in the pile of all that talent, who shined this season? Who deserves to be recognized for their accomplishment? Who has earned a fancy non existent trophy with their name hypothetically etched on a pretty brass plaque? Which players should Wild fans jump up and down like Bieber just entered the room about? And finally, which prospects just look flat out terrified to be potential NHLers?

Today, we award the prospects some much deserved imaginary hardware, all en route to the draft, when a new crop of players will join the field to compete next year. Any awards you would give out Wilderness?

As it says, this award is given to the prospect that is deemed most valuable

Obvious, Granlund wins this award. He has been the heralded as the second coming of whoever that savior you pray to. Coming from the mysterious lands of Finland, Granlund recently signed a NHL Entry-level deal packed full of expensive bonuses, and everyone has a good feeling he'll meet alot of them.

There is little question that he will become an offensive asset for the Wild, the real question is how good will he be? He has all the skills to be a star, but he isn't exactly big or speedy, so will he just be a good player? We've been looking for someone to carry the team offensively since Marian Gaborik left (Koivu is awesome but he can't do it all...). Can Granlund be it?

Award given to the best forward prospect in the organization.

Granlund beats out Charlie Coyle, Johan Larsson and Zach Phillips, who all had wonderful seasons. Not an easy thing to accomplish, but Granlund consistently brings it offensively.

Award given to the best defensive prospect in the organization.

On draft day in the 2011 NHL Draft when Brodin's name was announced, anyone else go "who?". I knew OF him but was really rooting for Sven Bartschi.

But this is why I am not a Wild scouting member and the Wild scouts ... well, are. Brodin had an amazing season and showed he was the best of the defensive prospects the Wild had to offer. Although there isn't much bluechip potential within the defensive core, that shouldn't take away from what Brodin accomplished as an 18 year-old.

He became a key defender for his team in one of the toughest leagues in the world. He then lead the Swedish junior team to the gold medal. If that wasn't enough, he managed to play regular minutes with the Swedish National team, and was compared to Kenny Jonsson and Niklas Lidstrom by his NHL teammates. Who would know better than guys like Niklas Kronwall and Daniel Alfredsson?

Award given to the best goaltending prospect in the organization.

The Wild never seem to run out of talent in the crease and we all should be very grateful for that. Manny Fernandez, Dwayne Rolson, Niklas Backstrom, a bit of Josh Harding, and now Matt Hackett seems to be on the same path.

No matter where Hackett is, he just manages to find a way to be the best. He shined in the OHL, he's shining in the AHL, and in around nine games worth of minutes in the NHL, he manages a spectacular 0.921 save percentage and 2.38 goals against average.

He etched out Darcy Kuemper and Johan Gustafsson who both had amazing seasons. Kuemper surprised with the Houston Aeros and Gustafsson lead Sweden to a junior gold medal and was one of the nominations for Rookie of the Year in the SEL.

Hackett will most likely head back to the Aeros where he will have to battle hard against Kuemper for the title of #1 goaltender.

Award goes to the prospect that has the best potential of beating the !@#$ out of the opponent. Watch out!

Enforcers seem to be going out of style, but Caron seems to still have a future with the Wild. He is a big 6-2 215lbs defenseman who fought 16 times this season in the WHL and 159 PIM in 63 games. Skillwise, he is questionable if he can play regular NHL minutes, but he most definitely brings a physical game we all love to watch.

Fighting his way up, one face at a time.

ROOKIE OF THE YEAR AWARD

This is just unfair to guys like Zach Phillips and Mario Lucia. Both of these guys made tremendous steps forward but its hard to beat a guy who managed to show the world he can play against men.

Coyle started the season quite well at Boston University with 14 points in 16 games. However, he didn't seem to really take charge offensively. He dominated physically but was still missing that special element.

Queue the drama at BU and exits Coyle to join the talented Saint John Sea Dogs. He immediately comes in and blossoms offensively, 2nd in team points per game, and tied for 1st in playoff team scoring.

Coyle just may have found his sweet spot and we all hope that carries on to the pros. We need it.

This goes to the prospect that has a best chance of shining ... then not. Thanks for 5 years of nothing Doug.

Haula had a good year with the Gophers, giving the team some offense it needed in the playoffs. He led the team in scoring and is starting to show that he may be a steal as a 7th round pick. But lets not forget he is a little undersized, not going to shine in the skating department, and while he did lead the team with 49 points, there were three other players that scored above 40 points. He may be a great story, but he still has a long road ahead of him.

Award given to the most underrated prospect in the organization

Larsson gets so little love, its somewhat sad to see. He is mixed in the pile of talented forwards that the Wild, and seeing how he plays in a far away land named Sweden, its understandable.

But this guy lead Sweden as its captain to the gold medal during the World Juniors, managed some decent minutes with the Swedish National Team, and won Rookie of the Year award in the SEL. That is one impressive resume, good enough to compete for the Wild's #2 prospect, right behind Granlund. Larsson is a forward that brings everything and has the potential to either play in a top six role or a star third liner.

Either way, Larsson will have a bright future and will get to show it off next season in Houston if he doesn't make the Wild cuts.

This goes to the prospect who has the worst "wasn't ready for the photo" moment. And I wanted to piss Nathan off.

You all know which picture I'm talking about. Here is exhibit A: 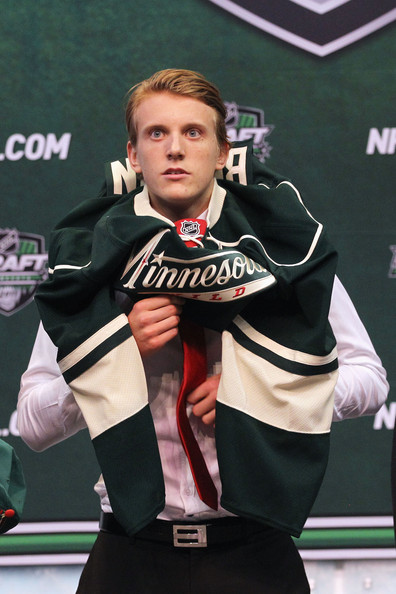 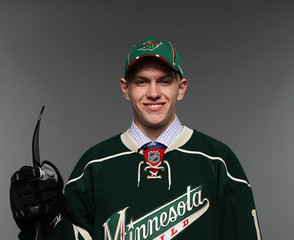