In the madness that is the Zach Parise sweepstakes, there are any number of sources for information. We've discussed many of them here. The folks presenting information range from nobodies an know-nothings to former GMs and wise reporters. Fans are left to fend for themselves in determining who should be trusted and who shouldn't, yet most Wild fans seem to be getting by without buying into all the hype.

I was a bit surprised by the fact that a one sentence throw away in a column by a local writer who, in my understanding, has fewer NHL contacts than I do (and I don't have many), not only took hold of the Wild fan base, but also spread across the entire hockey world in a matter of hours. The fact that every rumor that anyone mentions anywhere takes on such a death grip makes me long for the days when the Wild weren't considered even a remote possibility for free agents.

Where did the rumor of a 13 year contract come from? If it did happen, what would it mean for the Wild? Join us. 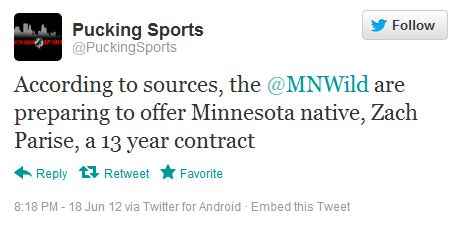 Sources? SOURCES? Plural? Even the *sources* don't list any sources.

As you have read here before, reading a rumor on Twitter and running with it as fact is about as smart as handing your keys to your drunk dog and telling him to drive you home. Especially in the season before the draft to July 1st, no one is to be trusted. Question. Everything.

Where did the rumor of a 13 year contract come from? The main culprit is a completely unattributed report on Sports Illustrated's website. The report reads as follows:

08:15 AM ET 06.17 | If need be, the Wild would be willing to offer presumptive New Jersey Devils free agent Zach Parise from Minneapolis a 13-year guaranteed contract.

So, we're at 8:15 AM, on a site that also uses a great deal of SB Nation's content on their site, and happens to be one of the most trusted names in sports. Sure, it is on a feature titled "Truth and Rumors," but listing a newspaper as a source is a great way to give the impression of fact and reliability.

The problem? That source is one sentence in Charlie Walter's column, which contains about 57 other one sentence "stories." This particular column is tantamount to Twitter rumors before Twitter ever existed. Especially the "Don't Print That" portion. A carry over from days of yore, a column no one should read, and yet is likely immensely popular because of the brevity involved, and the lack of brain power needed to read it.

Here is what Walters wrote:

If need be, the Wild would be willing to offer presumptive New Jersey Devils free agent Zach Parise from Minneapolis a 13-year guaranteed contract.

We have no source to attribute this to. Not even a guy in the parking lot, or an "NHL official" scared to comment on the record for fear of angering the Parise family pets. It's one sentence. One. No source, no background, no anything. Even Eklund wouldn't run this.

The one sentence runs after the information that Tom Gilbert is already working out in Wisconsin, a former Gopher hockey player bought a new house, Bert Blyleven pitched in a Hall of Fame game, and amateur golfer in the Twin Cities played some golf, some guy who works for the TWolves once was a DJ, an alumn of Cretin-Durham Hall quit his job as a prep football coach in Finland, and some people went on a cheesey ballpark tour bus trip.

The stories after the one sentence include information that some Twins pitchers pitched in games, and former AGM and likely culprit for much of the former Wild regime's piss poor scouting, Tom Lynn, will hold hockey camp of some kind here in the Twin Cities.

All of this is pressing and important information to have. If you are willing to accept a one sentence throw away as the basis of anything factual, please do not open your door to sales people. You can't afford it. This is one of the biggest stories in the NHL right now, and likely the biggest story in Minnesota Wild circles right now, and we are supposed to get all geeked out by one sentence that doesn't even warrant being discussed before a 62 year old amateur golfer that played golf?

So What if It Happens?

Indeed, it could happen. It could be very real. The Wild may truly be willing to offer a 13 year contract to Parise. If it does happen, it doesn't mean Walters had any real information. Hell, maybe Walters does have real information, it still isn't presented in a manner that makes me trust that he does. I mean, what if I wrote:

If need be, the Wild will declare bankruptcy.

Would you all run out and spread a rumor that the Wild were bankrupt? Come on now.

It also doesn't mean it is a good idea. The pressure the fans are putting on Fletcher to sign Parise is disgusting. I've read some saying Fletcher should be fired if he can't ink Parise. These are the people who shouldn't be allowed near sharp objects, but still. They have a voice.

Indeed. Whatever it takes. Sigh.

The question you need to ask is simple. Is Parise the type of player that you want your favorite team locking up a reported $7.5 - 9 million cap hit until 2025? What does that do if the cap shrinks? What do you do in seven years when Mikael Granlund is a superstar and the Wild can't afford to re-sign him because of the inflated and bloated Parise contract?

Is Parise a guy who is going to score 40 goals for the next 13 years? Highly doubtful. Is the pressure on Fletcher high enough that he is willing to ink a $117 million contract with Parise? Maybe it is. Who knows, but the level of stupidity surrounding this entire mess suggests to me that people might actually think that is a good idea for the Wild to do. It strikes me as the type of deal that would wind up handcuffing the team, and leave Parise completely unable to live up to the contract.

I am left shaking my head a bit at this one. A guy who no one in Minnesota would trust for hockey information if he was the last guy writing in newsprint writes an obscure, one sentence, claim in a column with some of the most inane trivia ever published, and it makes the rounds not only locally, but nationally.

It's embarrassing. You're better than this Wild fans, and so are you NHL fans.