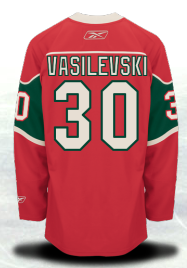 Has the size, mental approach and skill to be a solid No. 1 goaltender at some juncture ... at 6’3″, Vasilevski is a big and lengthy body to shoot at ... a terrific athlete with very good biomechanics ... possesses great balance ... flexibility ... has a strong net presence ... quick lateral movements ... a very formidable glove hand ... excellent positioning ... does a good job of challenging ... has good angles and squares up well to shooters ... strong rebound control ... extremely poised under pressure ... good mental composure ... reads plays well

One of the knocks against Vasilevski has been his stick handling ... how long will an NHL team have to wait for him to leave Russia, and will he even want to come over after several years of being asked to stay?

We never need goalies. Does the Wild even have a Russian scout?

Oh, the annual falling Russian because he's in Russia. Grigorenko has a little bit of that but he's playing in the Q so a bit of the factor is sort of forgotten.

Vasilevski is an extremely talented goaltender who is big, athletic, moves well, and is extremely calm under pressure, that is everything you want in a starting goalie.

Of course, like any young goaltender, he will need a bit of time to refine his game and adjust to quicker and more challenging opponents, but Vasilevski is pretty much your ideal goaltending prospect.

Now to the flaw: he's Russian playing in Russia.

With all the contract conflicts that have been seen throughout the years, it is not different in this goalie's case. And say he DOES come over to North America, the new rule by the KHL that "returning Russian NHLers will not count against the salary cap" makes contract negotiation in the next 5 years all the more hectic and unsure.

As a team that wants stability in their organization, will Vasilevski be worth your first round selection?