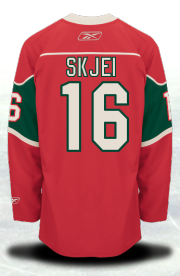 Skjay...Skijee...really not sure how to pronounce it...

Two-way defenseman that possesses good size and all-round ability ... a good skater that moves with smoothness and can go with an explosive burst ... transitionally mobile and fluid ... sturdy and strong in front of his own net ... makes use of his long reach; good pokechecks and good gap control ... has a heavy, strong slapshot ... has the ability to rush the puck up the ice by himself ... will jump into the play often ... slick with the puck ... above-average puck mover ... drives in hard with strength and creativity ... holds great vision with the puck ... shows extreme confidence atop the blue line ... at his best when he keeps his game simple

Not a hard-nosed kid ... won't play a physical style despite his size and needs to add some muscle ... still got a raw skill-set and is learning how to use his size effectively ... passing skills are okay ... not an overly creative player ... at times does too much rather than making the simple play; needs to slow his game down at times ... unrefined and short circuits at times without the puck and can be sucked out of position ... needs to step up his defensive awareness ... needs work on his consistency

He is a very interesting prospect. He is a mobile defenseman that can bring offense, which the Wild would love, but not at #7.

There are quite a variety of opinions of Skjei, some very good and some very bad.

Skjei is a mobile defenseman that has size, reach, and ability to play both sides of the ice. He can rush the puck by himself from the defensive zone to the offensive zone and get the play going. He has a good array of offensive abilities in passing and shooting. He has an active stick which he uses his reach to break up plays.

The problem is his consistency. At times, he uses all his tools to the fullest and is danger everytime he is on the ice. Other times, he tries to do too much and instead of making simple plays, he rushes the puck up the ice, leaving the blueline one man short.

He does this very often, which makes him a defensive liability at times. Other times, he is rock solid. This is the reason Skjei is considered a late first rounder - early second rounder.

The Wild at #7 have better options as they don't need a boom-or-bust type of prospect selected that high.