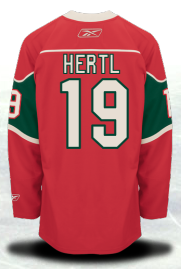 I already know what his nickname will be in the NHL

His feet are questionable ... not very good on his edges ... can trail the play due to lack of top-end speed

Hertl is a solid all-round forward, but the Wild have enough of that in the prospect pool.

Hertl isn't a flashy prospect. He doesn't skate down the ice in a single flash nor does he have soft and dynamic hands.What Hertl DOES bring is size, skill, and just solid all-around game.

He may not be the sexiest pick, but if you are picking near the later part of the first round, Hertl can add great value to anyone's prospect pool.

He protects the puck well, has offensive skills and stick skills, is always active, and isn't afraid of using his size to win puck battles.

To me, he is a safe pick with decent offensive upside. He is a lock to represent his country for two more years, and will have a high chance to serve as captain for a quickly improving Czech Republic junior program (with recent notables such as Dmitri Jaskins and Radek Faksa).